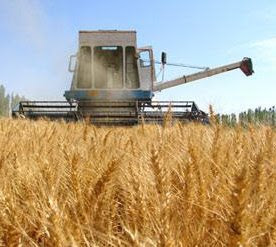 At the beginning of last month, the body responsible for tracking global grain production, the International Grains Council (IGC), was comfortably forecasting that increase in global wheat stocks to 171 million tons, bringing them to an eight year high - nine million tons above this year's figure of 162 million tons.

With world wheat consumption for the 2009/10 harvest estimated at 642 million tons and an expected production of 651 million tons, the global food situation looked assured, even if the harvest will be 37 million tonnes below the 2008 record.

However, a mere month later, after a run of bad weather in North America, and prolonged droughts elsewhere in the world, international investors are scenting blood. Even on the current IGC forecasts, this represents a five percent fall in production. Supplies are tight and look to get tighter.

This, though, might be seen as a longer term crisis although, contrasted with the apparent certainty of last month's IGC forecast, one expert was reporting yesterday that "grain markets seem about as clear as mud".

Wheat supplies, currently, are still seen as comfortable, buoyed as they are by expectations of a bumper crop in India and higher than expected forecasts from China, the world's two biggest wheat producers. But the fate of other crops, particularly corn (maize), is already very different.

Here, almost entirely as a result of the late spring and the cool summer, US production is set to fall to 771 down from the peak of three years ago when 788 million tons was produced. Against this, demand driven by biofuel production is soaring, leading to an expected drop in stocks of 21 percent after the 2009/10 harvest period. Significant falls are also expected in other crops, leading to a drop in total grain stocks on the year by about 15 percent.

Another vital crop is soya, where US reserves are likely to fall to a 32-year low, despite rising demand. Here, there is little excess supply to protect against possible crop losses and any hiccup in production in the Northern Hemisphere will be a major problem.

Then there is oilseed rape and adverse weather in the US and Canada is significantly affecting yields, with Canada alone forecasting a drop from 12.6 to 10.2 million tons on the year. Its oat production is expected nearly to halve.

On this basis, although we are not yet faced with a crisis, the United Nations' Food and Agriculture Organisation is predicting that food costs will be driven higher by market pressure, exacerbated by the stresses in the energy, financial and currency markets, which makes food commodities "increasingly vulnerable to external shocks."

Moreover, the expert opinion seems to be that current harvest projections are "highly tentative". Given how much the situation has already changed within the space of one month, everything – as always – depends on the weather, which is showing unusual volatility. As a result, global production forecasts for a wide range of crops are being revised monthly and, in many cases, downwards. The soya estimates, for instance, stood at 212.8 million tons a month ago but have now been reduced to 210.9 million tons.

The volatility is especially an issue with with China – the world's biggest wheat producer, which was reporting production problems and a serious winter drought and is even now experiencing extreme weather conditions with less than 60 percent of the wheat harvest in.

Thus do we get Steve Nicholson, a commodity procurement specialist at International Food Products Corp in St Louis. He notes that trend the last several years has been for demand to outstrip global production capacity. He warns that prices will have to stay high to keep farmers planting more to prevent shortages from developing – but that is before even we see weather effects.

Against this obvious fragility of the global food production and supply system, a continuation of the current cooling trend could have catastrophic implications. We are very much on the brink, and only the slightest lurch will send us hurtling over the precipice.