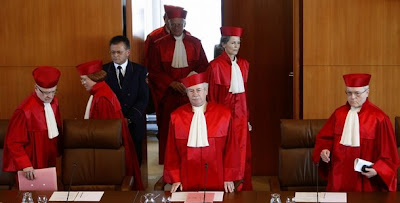 The long-awaited ruling from the German constitutional court at Karlsruhe has been delivered, offering a curate's egg verdict – good[ish] in parts.

According to the BBC, the court has decided that the constitutional Lisbon Treaty is compatible with German law - but has suspended ratification of it pending extra national legislation needed to ensure that the German parliament participated fully in adopting EU laws.

Quite what this latter provision means is not explained and we are not much the wiser from the report in Deutsche Welle. It, however, summarises the court ruling, telling us that, "the constitution says 'yes' to the Lisbon Treaty but demands that parliament's right to participation be strengthened at the national level."

Der Spiegel tells us that the [German] parliament will now be under pressure to rapidly bring in new legislation so that the ratification process can continue.

The treaty is supposed to be implemented by the beginning of 2010 at the latest and the parliament is to gather for a special sitting on August 26 for a first reading of a new law which will pave the way for ratification. The vote would then take place on 8 September, weeks before Germany's national election.

Nothing, it seems, will stop the Gadarene rush of national legislatures to divest themselves of powers, handing them over to an alien construct in Brussels.

With Irish commissioner Charlie McCreevy recently conceding that voters in most EU countries would have rejected the treaty, given the opportunity, one wonders what it is that impels our rulers to defy their own people in such an egregious manner.

Possibly, there is now a chance for German MPs to stall the new law before the national elections, although this seems a forlorn hope, which means that, even before the Irish re-run of the referendum, another ratification will be safely in the bag. The vice-like grip of Brussels gets ever tighter.