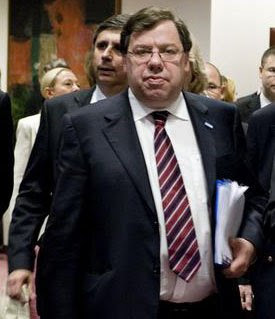 The Irish referendum drama took another lurch towards a conclusion today, with the European Council agreeing to offer to the Irish government "legal guarantees on national sovereignty" as an incentive which they hope will attract a "yes" vote in October when a re-run is planned.

That much is according to Reuters which refers to the guarantees being given the status of a treaty "protocol". This, as opposed to the declarations which were originally proposed, give them legal status, but this also means that they must be ratified unanimously by all 27 member states.

The Irish Times, unsurprisingly, has following the drama, earlier reporting that the deal followed an early morning meeting between Irish prime minister Brian Cowen (pictured) and Gordon Brown - the latter having blocked the idea of a protocol. It is understood that, as the meeting, Brown withdrew his objections.

Protocols do not actually change the constitutional Lisbon treaty. They are described as providing a "common interpretation" of it. Specifically, they pledge that nothing in the treaty will affect Ireland's constitutional provisions on abortion and the family, its right to determine its own tax regime, or force the state to sign up to European defence co-operation.

To support this we get an unnamed official cited, saying that, "Some people see this as a Pandora's box," adding: "It could be used by Conservatives to reopen the question of EU powers over [Britain's] social affairs." Bruno adds that a fresh debate in the Commons soon after returning to power could open up old wounds in a party historically split between europhiles and euro-sceptics.

This is amplified by the BBC's Mark Mardell, who remarks that there could be a campaign in Britain for a referendum on the protocols. Either that or someone will pop up and ask for their own reassurances, or the Czech or Polish president will find a new reason for not signing off Lisbon, or there'll be some other democratic diversions.

However, Mardell also notes that the protocols could simply be tagged onto the next accession treaty – perhaps either Croatia or Iceland – which was always an option. That would require no further discussions at EU level, unless of course a new Cameron administration made it an issue.

Here, Dave could make agreement conditional on the EU agreeing to new British opt-outs or, writes Mardell, "even a new relationship with the EU," then leading to a British protocol being attached to the accession treaty, on the back of a UK referendum.

Back in Ireland though, there is a mixed reaction to the deal. Newly-elected Socialist MEP for Dublin, Joe Higgins, is insisting that the protocols are an "elaborate charade" meant to distract attention away from the key issues.

"The debate on the Lisbon Treaty has yet to be held because we've been dealing with side issues," he says. "The fundamentals have still to be debated." Higgins thus maintains that the protocols (which will not be in force by October) will not mean that the treaty will be ratified.

This "take" on the treaty is, of course, spot on – the protocols do deal with side-issues, leaving the substance of the treaty unchallenged. But that aside, one wonders whether the Irish will even accept the assurances so far given, bearing in mind that any member state could refuse to ratify them after the next referendum, thus negating the whole deal after it is too late to block the treaty.

What would be interesting, therefore, is whether the Irish would be prepared to refuse to agree to Lisbon until after the protocols have been ratified – which could be some years hence. That would certainly put Cameron in the frame as his new administration would have no excuse whatsoever for refusing a UK referendum.

All of a sudden, EU politics are getting interesting again.