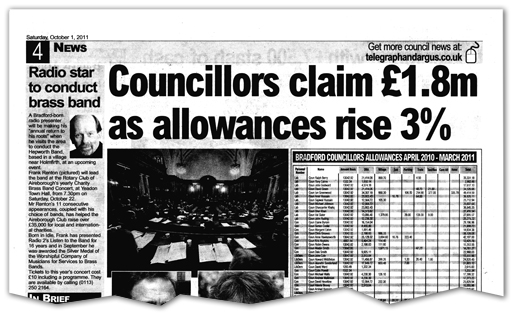 As we struggle to meet the ever-increasing demands of City Hall bureaucrats, the councillors who should be keeping a grip on the spending are themselves living it up to the tune of £1.8 million paid out in wages and allowances - a three percent rise on last year.

This is the man who presides over the Council Tax Fraud, ripping off the poorest and most vulnerable tax payers in the City by illegally inflating fees for late payment of local taxes.

If, of course, the councillors did provide a check on the Council (and some are certainly trying), they might be worth their payments in a city with a half-million population – bigger than some countries.

But Greenwood's hands-off approach to official theft has catapulted the City to the top of the league on the "Greed Index" (above), based on what different councils are charging. Sending out nearly five times as many summonses as the lowest council, it also charges on average seven times the rate of the cheapest.

Bradford is thus capitalising on the hardship of the many, exploiting them as a business opportunity to yield in excess of £3.2 million a year, giving the council a comfortable surplus with which to pay their councillors and have six-figure sums left over for their chief officers' salaries and pensions.

And while the Labour leadership is silent on the issue, so too is Councillor Anne Hawkesworth (Con, Ilkley). But then, as leader of the Tory group for a year from May 2010, she is the second-highest beneficiary of the council rip-off, claiming a total of £42,107.

Not a single penny of this, though, was ever democratically mandated. The taxpayers were never asked if they wanted paid councillors, much less chief officers on six-figure salaries. It is perhaps unsurprising, therefore, that nearly one in six households withhold their taxes until they receive a court order forcing them to pay.

With local democracy having all but broken down, such resistance is all that is left to us … for the moment. As the rip-off continues, though, many are taking the view that this is not enough. The "Greedy City" is on notice.