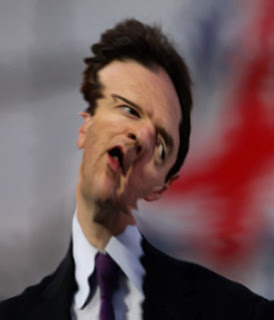 There could perhaps be no better example of "above the line" behaviour than Massa George graciously reaching down to us plebs, now deigning to inform us that, in his wisdom and generosity, he is going to "save" us £72 by not charging us extra Council Tax next year – a tax that has more than doubled since 1997.

No doubt he will be expecting us to rush out and buy flat caps so that we can doff them in gratitude, when his well-guarded visage sweeps past in the armoured limousine so thoughtfully provided by his grateful subjects. Perhaps they may even be able to afford some knee pads, so they can kneel in homage as the limousine sweeps past in the Chaika Lane.

Undoubtedly, Massa George believes we are as stupid as the editors and journalists of the newspapers he reads, and that we will accept that, despite public borrowing being at a record high, he has suddenly, miraculously discovered an "underspend" of £800 million.

It is this, incredibly – or so we are told - which will enable him bribe local authorities not to put up their headline rate of tax, and thus damp down the inevitable protests that would otherwise arise.

It goes without saying that the cerebrally challenged MSM fail to understand that far from actually "saving" money, Massa George is simply shunting the proceeds of one tax into another pigeon-hole, to avoid the nascent rebellion that is building over this administration's predatory tax policies.

What seems to have escaped the dim little brains of the MSM, though, is the simple fact that local authorities are being given another "fix" of public money. Their cash habit has not been curtailed in any way, and they will be there with their hands out for more when this current bung runs out.

Further, it has not dawned on the MSM (nor even the Treasury, it would seem), that local authorities are becoming extremely inventive in devising new revenue streams, and milking the existing funds. Not only are they taking from central government, they are also clawing back every penny they can find, all to feed their insatiable cash habit.

Once again, though, it is difficult to know what to be most offended about – the fact that Massa George is taking us for a ride, or that he thinks we are stupid that we actually believe his vapid little press releases.

Thus does Progessive Contrarian note, we must make our views known, by becoming a thorn in their side. For sure, the MSM isn't going to. They hardly seem to know the time of day.