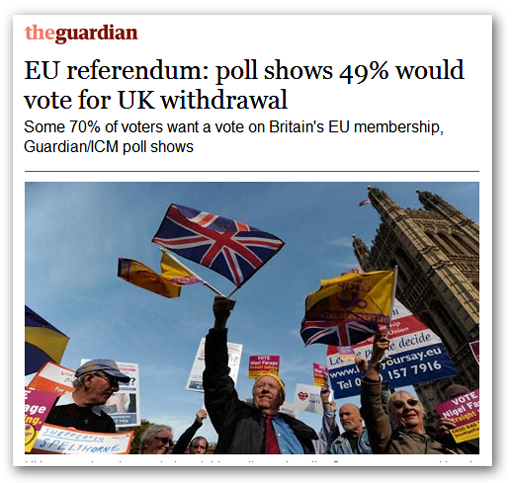 "Forty-nine per cent of voters would vote to get Britain out of Europe, as against just forty percent who prefer to stay in", says a Guardian/ICM poll - a nine-point lead. Yet, in July of this year, the Daily Mail was reporting a "huge lead" of 50 to 33 percent of the public wanting to leave the EU – a 17-point lead.

Thus, sentiment has dropped eight points in three months. And, as we pointed out in July, a poll in 1974 gave a lead of 18 points for withdrawal – 50 percent as against 32 percent. But, when the actual referendum came in 1975, 67.2 percent voted to stay in, while those voting to leave had fallen to 32.8 percent.

The Boy, meanwhile, has argued that the British people prefer to stay within the EU. He may not be wrong , but how odd it is when he doesn't want to take the risk of finding out – even though the odds are possibly in his favour.