I think we knew this 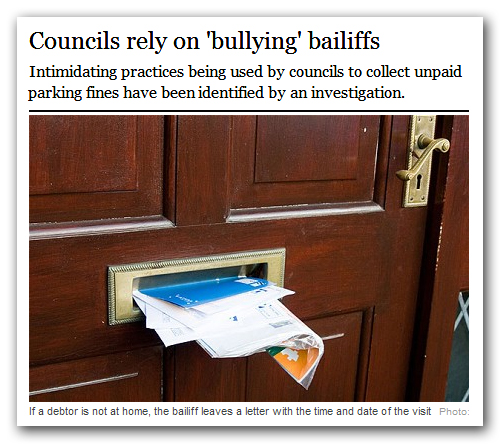 Now the telly is doing the story, the MSM gets interested, confirming the introspective nature of the animal. A bailiff at Rossendales, a debt collection firm that works for almost 150 councils, repeatedly broke the guidelines covering bailiffs, goes the story – thus missing the key issue. This is not a matter of "guidelines". The bailiffs are breaking the law - the headline should read "illegal practices".

John Boast, senior bailiff, for Rossendales, we are told, broke several "guidelines", while supposedly "training" an undercover reporter. Although bailiffs are not supposed to approach people at anti-social times, Mr Boast said that he often visited houses at night and on Sundays.

If a debtor is not at home, the bailiff leaves a letter with the time and date of the visit. Debtors are charged £24.50 for the first visit and £18 for the second and are supposed to be given the opportunity of clearing the debt immediately. "If you' re delivering a letter early, you don' t knock", said Mr Boast.

And that is the "phantom visit fraud" which Booker covered over a month ago, and which we first reported on 9 September. Yet the weak as ditch water report on covert filming in ITV1's Exposure: Bailiffs, which airs tonight, only says that the details, "raise concern about regulation". That is the MSM for you.

Meanwhile, Bradford Council, having carried out a "level 2" complaint investigation, have decided that I "have provided insufficient evidence to indicate any impropriety from either the Council or indeed its agent Jacobs", and are refusing to take any further action.

Not only that, their Customer Relations Officer, Mr Mushtaq Ahmed tells me: "I found no evidence of impropriety in the bailiff’s dealings with you. I have therefore not upheld your complaint". He is so "confident" that "the Councils actions caused you no injustice" that he is refusing to entertain any further correspondence.

"You are now questioning the Councils impartiality", he sniffs, then declaring that "there is no further merit in the Council continuing to correspond with you regarding this matter. Please consider this as the Councils final response".

West Yorkshire Police, however, do not appear to have finished with the matter. Further irregularities have been found – which Bradford still chooses to ignore – and a police inspector has been allocated to the case. Had the media been on the ball, it would have been following the same line. But, as we have found to our cost, the MSM doesn't do serious news any more.

If you want real news and analysis on such matters, go to the blogs.