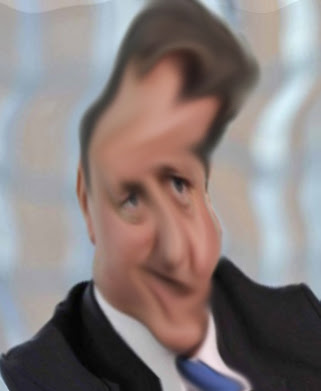 Such is the desperation of the "right wing" media and the bloggie luvvies to support The Boy that we even had Janet Daley last week trying to airbrush his egregious "credit card" gaffe.

Writing in the Failygraph, the Great Daley opined that, "The last-minute change on 'households paying off their credit card debt' was an embarrassment he could have done without but who will remember it by the end of the week?"

However, lacking the great perception, in-depth knowledge and the expense account of the Great Daley, this humble commentator observed that this was "the ONLY thing that will be remembered by the end of the week".

Now, it would seem that "umble 'as it". Virtually every Sunday newspaper has commentators trawling over what turns out to be an unforced error that escaped multiple layers of scrutiny and approval.

According to the Independent on Sunday, far from being an off-the-cuff remark in an unfinished speech, the credit cards line was contained in the written handout – meaning it must have been signed off by everyone in the speechwriting team, including Cameron's director of communications, Craig Oliver, and even The Boy himself.

We said at the time The Boy re-wrote the speech that it demonstrated yet again that the poseur was not only a useless politician but, even in his area of supposed expertise, he was incompetent at managing his own PR.

Commonly, it is observed of politicians that their measure is the advisors and the subordinates they hire, and the Boy has been less than scintillating in his choice of media advisors. And one is now far from impressed by his latest choice of speechwriter, after the then current post-holder mover up to take the vacated slot of head of strategic communications (that itself indicating turmoil in the Cameron camp).

But the dictum about choosing subordinates also applies to defence secretary Liam Fox. It is no secret that we have been distinctly underwhelmed by this man, and now his own choice of advisor threatens to bring him down in an affair which seems decidedly tacky. But that too must reflect on Cameron, whose choice of Fox as defence secretary was always poor. As shadow secretary, his performance was lacklustre and he never mastered his brief.

But it also reflects on those "bloggie luvvies" who espoused Fox as the keeper of the flame for the right wing "eurosceptic" tendency in the not-the-Conservative Party. Their man is now looking distinctly shop-soiled and even in the increasingly unlikely event that he survives this particular crisis, politically he is mortally wounded.

Thus, it seems, not only do we have a prime minister figure who is fundamentally lacking in judgement – as judged by the company he keeps and his most recent performance – we have his high-level friends and supporters unable to detect what amounts to a train wreck happening in front of their very eyes.

All of this goes to show, of course, that when the chatterati get going inside the Westminster village, nothing good will come of it. But, as this one-dimensional sock-puppet recedes further up his own fundamentum, some small entertainment can be had from watching the luvvies squirm.