Who do you think you are kidding? 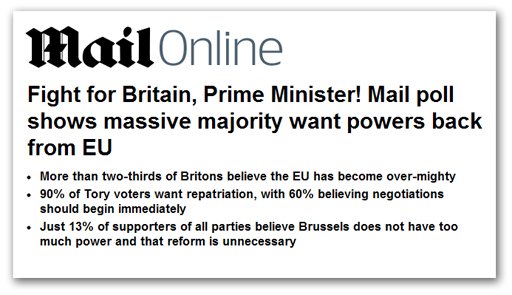 Whitehall officials, we are told by the Failygraph, are urgently reviewing every aspect of Britain's membership of the European Union to support The Boy's promises "to bring back powers from Brussels". The Daily Wail runs its own version of that story (headline illustrated), the two papers, with others, thus building up a head of steam for something that cannot happen, and therefore isn't going to happen.

Why currently there is such emphasis on seeking to achieve the impossible is something of a mystery, leading to speculation as to whether The Boy and his acolytes really know what they are doing. But, of all the attendant issues, that is possibly the easiest to resolve. Almost certainly, they do not.

Going back only a little way, one will recall that the Tory mantra, by which all problems EU were going to be resolved, was the famous "handbag". A putative Tory leader was going to go to Brussels and with one wave this fabulous instrument, the "colleagues" were going to quail before its power and grant us our every wish.

Wearily and repeatedly, it was left to the likes of us to point out that the changes ostensibly desired by the Tory rank-and-file were not possible without treaty changes. They require an intergovernmental conference (IGC) - which is not within the power of the British to convene - and then unanimity on the proposed changes, which must be ratified by every member state.

To date, these have been the hurdles which have rendered inert the magical properties of the handbag. This potency issue, however, seems to have percolated into the dim consciousness of the Tory collective, to the extent that The Boy is now talking about exploiting the need of the "colleagues" to hold an IGC in order to push through the treaty changes needed for the management of the eurozone.

Theory has it that, once the IGC is declared, the UK can introduce on the agenda its own requirements – amounting to substantive treaty changes which will repatriate powers. With the eurozone members needing our approval for their changes, we can then barter – their approval of our amendments in exchange for our approval of theirs. 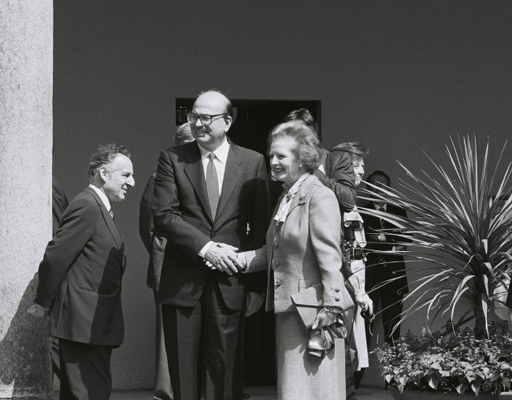 Unfortunately, this Janet & John appreciation is somewhat at variance with the political realities of the European Union. Specifically, they lack any knowledge of the history of the Union, they are unaware of the "Craxi doctrine" which emerged from the 1985 Milan European Council, where Thatcher was ambushed, with the "colleagues" agreeing to an IGC against her will (Craxi and Thatch pictured above).

At the time, the rules for convening an IGC dictated that there should be consensus amongst member states, but what Craxi established was that, in the case of dispute, this meant simple majority voting by the leaders of the member states.

What has since emerged also, honed and refined during the shenanigans over the EU constitution and the Lisbon treaty, is that the agenda is also determined by "consensus", with the EU commission holding the pen. Thus, whether the UK would even be able to put her demands on the agenda would be a matter for the rest of the "colleagues".

Now, given that any forthcoming IGC will be convened to deal with the needs of the 17 eurozone members, which comprise the majority of the 27 states, it is unlikely that they will want the distraction of The Boy's political demands. Thus, the likelihood is that these will not even get onto the agenda. They will be blocked by a majority vote of the eurozone members, if need be.

This, of course, will leave The Boy stranded, with but one option – then to veto the conclusions of the IGC, blocking any new treaty. That would make him about as popular as an Israeli ambassador at a Hamas convention. Cameron would have to decide whether to incur the wrath of the entire collective, or cave in. And we know exactly what the result would be.

Thus, whatever the political motivation of The Boy is pursuing the current line – and we'll explore that in another post - it is not going to happen. As always, the only real options are two-fold: all in, or all out. Repatriation is not an option … not through negotiation, anyway. It is smoke and mirrors, not political reality.

As to who The Boy is kidding, probably the first and main person is himself - aided and abetted by the witless media which, like The Independent, bleats "euroscepticism", but has no idea what it means. The term "fool's paradise" comes to mind.