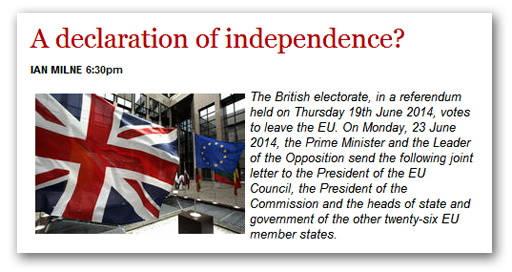 Rather predictably, we see the Speccytwats getting excited about Ian Milne's pamphlet on leaving the European Union – available from Civitas at a price I am not prepared to pay.

What Milne cares to reveal in The Spectator, however, does not fill one with confidence, as he sketches out his ideas of an exit, thereby displaying a less than complete understanding of the legal and practical issues that would arise from our withdrawal.

A clue as to his rather superficial grasp comes with his offhand declaration that, on "Independence Day", two years after the EU has been notified of our intention to leave, the UK "will cease involvement in all other EU policy areas", which includes "fishing".

Just taking that one issue, it would be a quite remarkable thing if within the space of two short years, the internal legal issues between Scotland, Northern Ireland and even Wales could be resolved, allowing even the foundations of a UK fishing policy to be developed.

There would be even less confidence in our ability to secure all the bilateral agreements with the EU, and states such as Norway, Iceland and the Faroes, needed to replace the standing provisions of the CFP, to enable us then to being devising and implementing the technical issues required of a fisheries policy.

And this is not the half of it. In passing, Milne states that, with immediate effect (from the day we declare our intention to leave), only British Courts will interpret and apply EU law. Conflicting rulings of the ECJ and British courts arising during the next twenty-four months will be determined by the usual international dispute settlement procedures, he says.

As far as fishing goes, that would effectively leave our seas open to the depredations of EU and foreign fleets. With our fisheries protection resource cut to the bone, we have no capability to enforce our own fisheries regime – not that we would have one – and would have no practical means of exercising jurisdiction over non-national shipping, having ceased to recognise the ECJ.

Of course, what would apply to fishing would apply, in spades, to the management of our skies, and airline traffic, which is currently subject to EU law. It would affect our merchant shipping and all matters relating, to our trucks and cars going abroad, and much else.

Our leaving would also affect British pensioners resident in the EU, our reciprocal health arrangements, our passport and visa arrangements, mobile phone "roaming" arrangements, the postal system and conventional telecommunications … as well as radio and television broadcasting.

In short, what Milne – and so many others – manifestly fail to understand are the implications of the EU being much more than a trading agreement, even though they complain that this is the case. EU law and administration systems have infiltrated the very core of UK governance, to the extent that removal will be akin to extracting a malignant and invasive cancer from a human patient.

The problem here is that, with nearly forty years of economic and political integration, disengagement will take far longer than the two years Milne suggests, and be far more complex than anyone appreciates.

Even then, much of the law would continue to apply, it having been agreed through regional bodies such as UNECE, and global bodies such as the OIE – of which Milne seems unaware. The first task we face, therefore, is attempting to understand what we will have to deal with. And here, we are not even past first base.