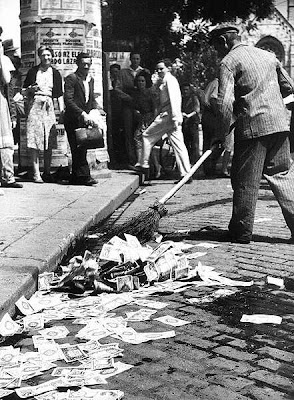 Having yesterday morning written a quick piece on the so-called "deal" stitched up by the "colleagues" and then switched off completely while I finished the book index, it came as something of a shock to come back twelve hours later to find the same item topping the news agenda

In fact, the only thing that is different is that I've finished the index – nearly 2,300 lines and only twelve short of 10,000 words. No wonder it takes so long – a complex piece of writing which, even if it was narrative text, would probably have taken a couple of weeks.

At least, though, that is real – which is more than one can say for the colleagues' endeavours. Peter Speigel of the Financial Times, notes with accuracy if stunning lack of originality, that the devil in the details … and the data.

He, like many, observes that the most important things were not what was in the agreement, but what was left out. It could, he writes, be days or weeks before the details that underpin the entire package are finally ironed out.

"More than we had expected … has been left to be finalised and detailed over the next month", says Malcolm Barr of JPMorgan. "There is plenty of room to doubt whether each of the key aspects of the package will deliver".

Mary Ellen Synon dismisses the whole deal as designed to fail, and Heffer puts it down as smoke and mirrors. Bruno's piece is equally dismissive. The supposed trillion euro bail-out "is in danger of unravelling" after Germany's central bank warned that the rescue measure was too dependent on the high-risk deals that caused the economic crisis, he writes.

Actually, it never really ravelled, which is the real problem. In fact, the package can't deliver. We have indeed been treated to another phantasmagorical session of smoke and mirrors. Ambrose explains why, but it all boils down to a single issue. The structure of the single currency is fatally flawed. It doesn't matter how good the wax job (not very) – the car hasn't any wheels. It isn't going anywhere.

So, as before, despite the meaningless froth on the markets which has excited The Independent, nothing has changed, other than my index. There is no solution, as this website avers. It is arguing that we are now in for a bout of hyperinflation, offering the picture we have published here. I would tend to agree – that is the destination. The only thing we do not have yet is the timetable.