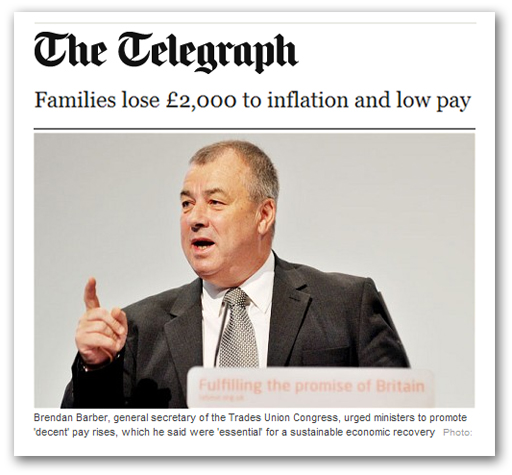 Families are suffering an "unprecedented collapse" in living standards as high inflation and low wages wipe £2,000 off typical household incomes, says The Failygraph. It bases its report on work done by the Institute for Fiscal Studies, but we didn't need this to tell us. We can see it all around.

But what the report does not mention is taxation and council charges, which are also adding to the burden, plus the diverse green levies that are adding to the costs of home energy and transport.

For some families, there is also the very real burden of the youth unemployed, with figures out tomorrow expected to confirm the worst youth unemployment figures for nearly 20 years.

For the million NEETs, it is the lack of hope, as much as the lack of jobs, that is dangerous, says The Independent. For families trying to maintain a degree of cohesion, the raids on the bank of mum and dad weaken the financial base. – as private sector pensions become increasingly unaffordable and the value of savings plummets.

What is terrifying though is that our masters – in central and local government – have not joined the dots. People who have less money have less money to pay in taxes and charges. Further, they are likely to be more resistant to increases in charges, and are less resilient when it comes to dealing with financial shocks.

Yet local councils in particular seem to be loading on charges as if there is no tomorrow. Their actions are provocative and asking for trouble. And they are going to get it. People are running out of patience – and tolerance. The good times are over and the mood will get steadily uglier as reality bites.