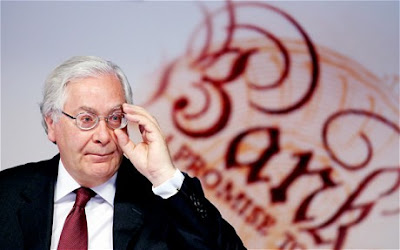 There is an element here of Mervyn King covering his back, but nonetheless his warning is clear. Britain is at risk from a fundamental crisis, he says, and governments have not yet addressed the underlying problem of overspending that is at its root.

Yet every day one sees examples of wild government spending while at local government level, reduced grants from central government are not triggering restraint but merely more inventive ways of raising money.

Says King, the only answer to debt problems is for countries to "adopt compatible policies so that they can credibly service their internal and external debts". This is not exactly rocket science, yet it is something which seems to be beyond our current leadership. There is no serious attempt at reining back expenditure.

Thus are we condemned to watching the slow-motion train wreck. We can all see it, except those in the bubble, who seem oblivious to OUR impending fate. One wonders if they have the first idea of what is going on.