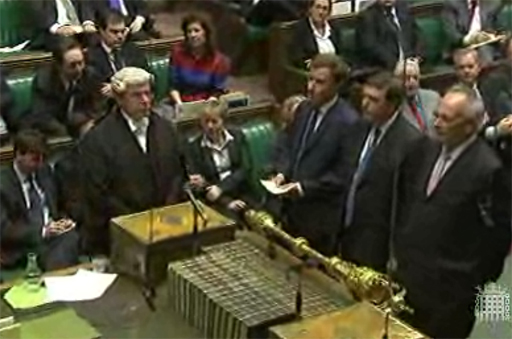 This was nearly the best possible outcome for a ridiculous exercise, the origin of which most of the MPs in the chamber seem to have misunderstood. There were some good speeches, many well-meant, but much dross.

In the end, though, MPs voted 483 to 111 against giving voters a referendum on the EU. Much was heard during the debate about the "political élite", but that élite decided the electorate could not be trusted. They knew best. What little pretence we had of there being a functional democracy crashed and burned.

A referendum could well have been a disaster for the eurosceptic cause, although the MPs were not even prepared to take a marginal risk – not even willing put the case to the test which, with a rigged vote, was almost certain to bring victory to the euroslime. Instead, the majority chose to put party whips before the people they claim to represent.

Possibly, about 80 Tory MPs rebelled. The MSM will almost certainly make a big deal about the Tory "rebellion", but who cares? Parliament as an institution has spoken - and that is what matters.

Whether we agreed with the idea of a referendum (and we did not) is immaterial. The majority of people - whether misguided or not - wanted one. Parliament said "no" - the MP collective raised two fingers to the nation. The only thing left to us is to return the compliment.

MPs really are stupid people if they think there are going to be no repercussions. The brighter ones probably realise. The rest will have to find out.