The dash for cash

There are no cuts in local government income. Cuts in services are being made in order to finance council pension gaps, executive salaries and bonuses, and councillor expenses – plus back-room projects such as climate change.

Yet the fatuous Boy claims credit for what amounts to a miasma: "We froze council tax this year - and as George announced in that great speech on Monday, we're going to freeze it again next year too", he prattles.

For sure, there is a cap on this one income stream, and the squeeze is on central government grants as well. But the shortfall is being more than compensated for as councils switch to alternative funding streams and rack up their fees and charges.

Thus, while there are ritual protests about cash-strapped "town halls" which are having to "struggle to provide services", what gives the game away are articles such as this. Not a stone is being left unturned in this "dash for cash". Even crippled grannies are being forced to pay for their disabled parking badges.

However, the hikes in fees and charges are being reported piecemeal – if they are reported at all – so there are no hints of the scale of this cash grab. Yet, in my own council, Bradford, Council Tax last year amounted to £163 million, while fees and charges raked in £151 million. 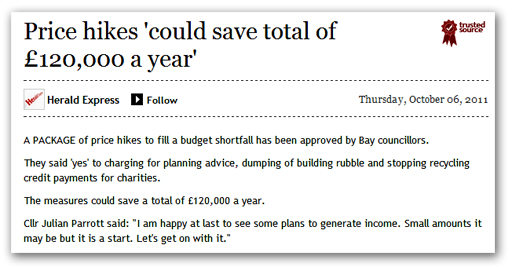 An illustration of the mechanism comes here (illustrated above), in Paignton, Devon, where charging for planning advice, the dumping of building rubble and stopping recycling credit payments for charities, is set to yield £120,000.

This is characteristic of the salami-slicing tactics adopted by councils, where relatively small increments in charges (and the cutting of small concessions) can see considerable gains. Thus we see Birmingham City Council increase its Council Tax summons charge from £57 to £63 – a ten percent hike – which will yield in the order of £400,000 this current financial year. 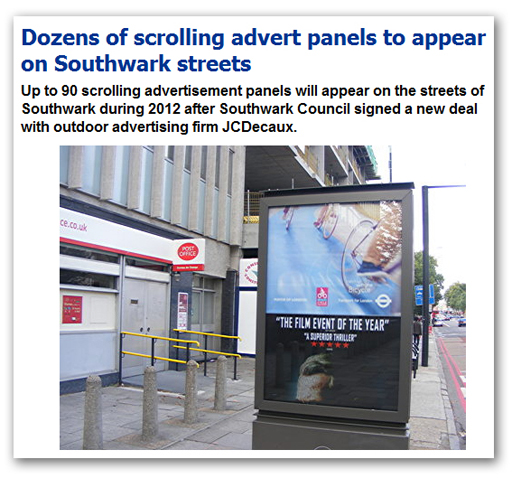 On top of that, we see cash-generating ventures of a nature that would never be permitted by private sector enterprises (illustrated above). This is turning local authorities into gigantic, money-making corporations, with next to no democratic control.

Now, with the cap on Council Tax and across-the-board increases elsewhere, this year fees and charges will almost certainly bring in more than Council Tax in many Councils, making any notional cap a complete irrelevance. Like the Maginot Line, councils have simply by-passed it and turned themselves into perverted forms of businesses, with license to milk their "customers".

Even as the likes of The Boy posture and preen, there are no effective controls or limits on income generation, allowing local politicians to fill their boots as before. We are being taken for fools.