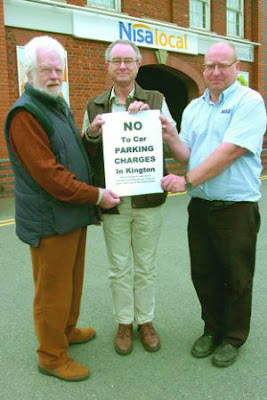 Mary Ellen Synon offers us an outrageous example of EU profligacy in pursuit of its own propaganda, the like of which should have us marching the streets.

The facts of life, though, are that such things – however outrageous – will not get the protesters out. The issue is too distant, the impact too remote and, in the final analysis, is not something which the average person can affect. In the nature of things, people only tend to get worked up about things over which they can have some influence.

Thus, the issue that is getting the good citizens of Kington in Herefordshire worked up is car parking charges, with more than 2,000 people in this tiny rural town signing a petition against the decision to introduce fees at the High Street car park.

This is neither selfish nor illogical, but conforms exactly with the specifications of an issue which will bring people out on the streets (pictured). It is local, it has a direct, measurable impact, it is perceived as being unjust or unreasonable and, crucially, it is amenable to change, given a modicum of direct action.

That people are reaching the limits of tolerance is illustrated by events in Wiltshire where a downturn in car park income has triggered the classic (and economically illiterate) response from the local council. It has put up charges to make up its income shortfall, the effect of which – according to local traders – has driven business away.

Such is the level of protest here that the council leader has not ruled out a U-turn at a full council meeting on 8 November, again illustrating how, when expressed at a local level, people power can have an effect.

Arguably, there is a lesson here for all of us. Given that controlling government is about limiting the money supply, much more revenue generation needs to be originated at a local level. Instead of the bulk of money being raised through centrally determined taxes – and then passed down to localities – the flow could benefit from reversal.

What we could see is a variation of the pattern already adopted, where local councils collect money for counties, where they have them, the passenger transport authority, the police and fire brigades, and pay a precept to keep them functioning.

Thus we could see the bulk of taxes – such as sales, income and corporation - raised locally, with central government paid a precept according to means. And where money flows upwards, so does the power.

Ideally, one might see a situation where local authorities decide on the best mix of taxes and charges to suit the locality, with provision for healthy tax competition between districts.

Add to that real people power, with an annual referendum on the budget – with the ability to veto – and you would be beginning to see the emergence of real democracy. In this, there is no avoiding the central issue. Democracy occupies the low ground, not the heights.