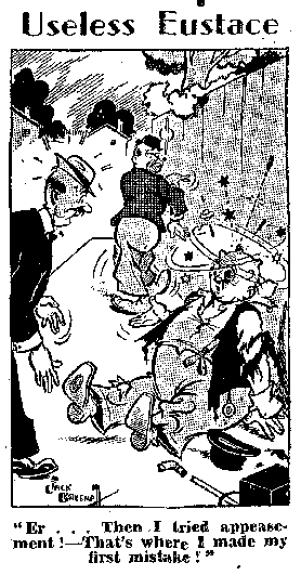 Autonomous Mind brings us up-do-date with the latest instalment of europlastics' playtime. Witterings from Witney offers a serious contribution, bolstered by TBF and Raedwald.

Also having a serious go is Helen, over on Your Freedom and Ours. Perhaps Eustice should have looked at the fate of his namesake, taken from this 1940s cartoon in the Daily Mirror. It really is quite remarkable how this creature lives up to his alter ego.

The MSM, of course, just doesn't get it, with the Failygraph letting Charles Moore loose on the subject. He follows the herd, arguing for a free vote on the EU referendum, he and his commenters unable to appreciate that this is classic displacement activity and a crass waste of time and money, in terms of achieving anything positive.

The only advantages of the whole episode are that it further embarrasses The Boy, and shows Hague up for the europhile that we always said he was.

In a sense, though, Hague is right about one thing – that the debate on Monday is a distraction, but not for the reasons stated. The real reason why it is such a waste of time is that, even if the debate were successful in terms of achieving a referendum, the outcome would not result in our leaving the EU.

As set out, with its three options including a "renegotiation" clause, the message would be so confused as to allow virtually any interpretation. A simple "in-out" referendum is not on offer, and were it to happen, I remain convinced that the outcome would be difficult to predict.

More importantly, there is a huge number of people who see in withdrawal from the EU the answer to all our problems, and are thus focusing all their political energies on it. Some argue more credibly, that leaving the EU is a necessary precursor to resolving our structural problems.

I used to think that way, but have latterly come to the conclusion that leaving the EU would in fact make very little difference to the way we are governed. In or out of the EU, I see our political élites behaving in exactly the same way.

And given that, in so many areas, we go further than EU requirements, I do not see any great bonfire of regulation attendant on our departure from the EU. Nor indeed are there any great savings to be had. Would agricultural subsidies actually stop because we left the EU?

But rather than address the fundamental issues of how we are governed, and work towards taking the next steps in the long road towards a democracy that we still have not achieved, too many believe that well-motivated activity is a substitute for thinking and planning.

Actually, though, we have been there before. During the War, there was a resurgence of political activism, with Socialism being the great hope for the masses. Voting for Labour in 1945, however, merely replaced capitalist bosses with union bosses.

It took Thatch to weaken the power of the unions, but the result was not a great sweep towards democratisation. Into the vacuum of power that the departure of the unions created, the corporates moved in – including many of the unions which had reinvented themselves – leaving us no better off.

I really do not want a repeat situation. We do not want to labour long and hard to oust our masters, only to have a fresh set take their place, with very little fundamental having changed. The changes we need must be readied and largely in place, while we get rid of Farmer Jones, or all we end up with is another Napoleon.