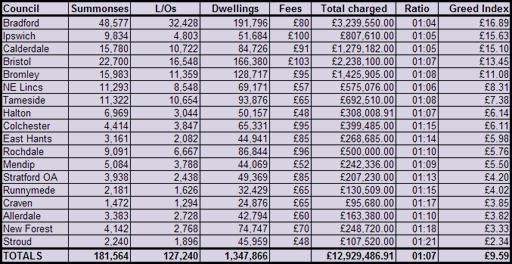 Following on from our piece last Saturday, the results from the survey of summons and liability orders are extremely slow in coming in. We know that there are at least fifty requests pending, and more are being sent out each day, but it would appear that councils are making the most of the time allowed them (20 working days) to respond.

Some of the councils which have answered have sent the wrong information. Other give incomplete information and one has even said it holds no records. Thus, follow-up requests are having to be made, further slowing down the process of information gathering. We have also been told that some councils are extremely suspicious of this exercise, (rightly) fearing that it is going to cause problems for them.

Despite all that, though, it is worth putting up what we have – eighteen verified results so far – assembled in the form of a ranking which we are calling the "Greed Index".

To achieve this ranking, what we have done is take the total sum charged by each council for their Council Tax summonses and liability orders in the financial year 2010/11, and divided it by the number of households. That reflects the number of summonses and orders sent, the charge levels and the size of the council.

Conveniently, the resultant figure represents the average surcharge, over and above the authorised Council Tax level. It effectively measures the size of the council stealth tax, and the amount it would have to add on to the Council Tax to maintain current spending, if it was prevented from stealing the money through this route.

With the fifteen results we have in, Bradford remains at the top of the league, both in absolute and relative terms, issuing the largest number of summonses and leading the "Greed Index", its "take" still seven times higher than the cheapest borough (Stroud).

Some might argue that the people who end up paying this surcharge deserve what they get, and that the fees simply represent the additional costs to the councils in recovering their council tax. But here, there are several points to make.

Firstly, whether the idea of surcharging late payers is a good one, or not, there is not provision for it in law. To do so is simply illegal, and no council should knowingly and actively break the law in order to fill its coffers – or at all.

Secondly, there is already a substantial penalty built into the system as late payers lose their rights to pay by instalments. Perversely, therefore, most "late payers" actually end up remitting the bulk of their tax earlier than those who pay on time, but via instalments.

Thirdly, the actual marginal costs of collecting from late payers is low – representing only a few pounds, at most. And that is more then compensated for by the interest earned from getting the money in early – compared with earnings from instalments.

The real issue though is that, since local government reorganisation in 1973, local authority taxes have effectively doubled … and some. A local reader recently came across his father's records for his house, showing the rates charged in 1973 at £92 (£830, adjusted for inflation). Now the same house attracts a charge of £1,570.

However, that is only the half of it. In 1973, water rates (at the equivalent of £120) were part of the bill. Many services, from planning applications to building regulation approval and the dog pound, were either free or charged at a nominal price. Some domestic drain clearance and pest control was free of charge. And the court cost for a summon was set at 70p.

As well as all that, in 2009, local councils raised £1.9 billion from parking fees and fines. Back in 1973, parking meters outside central London were a rarity and parking fines went to the Treasury.

The scale of fees and charges is, to the general public, largely unrecognised. But even in the 2007 Lyons Report on local government, it was reported that fees and charges had become a significant source of income. Then, over a quarter of all councils raised more money this way than they did from Council Tax. Now, as council squeeze the pips for every penny of revenue, it is likely that even more money is coming in from fees and charges.

Thus, while we are familiar with headline Council Tax rates, which are watched very closely, councils have been creeping in the back door, pulling down huge sums which have largely escaped public (and media) attention. It is these - as much as the direct taxation - which have fuelled council spending habits.

This hidden taxation is in small part measured by the "Greed Index" we have devised, but the one charge represented is only an indicator – and not necessarily good enough. However, we will continue with it, and see where it takes us. But we will also work on a more comprehensive index for next year.

And, for the record, we have a revised question:


Please could you supply information on the number of Summonses and Liability Orders issued by the Council in respect of Council Tax, for each of the financial years since April 1992 (or from when records are available) to the present, itemised separately by year and document type, and the total fees charged for each year (specifically for the two documents – NOT the Council Tax), again itemised separately by year and document type. Could you also please specify the charges for Council Tax summonses and liability orders for each of the years.

If you have not yet tasked your local authority with this, under the Freedom of Information Act, please do so - all it takes is an e-mail. We would like to see where your council stands in the Greed Index.