That's a success then? 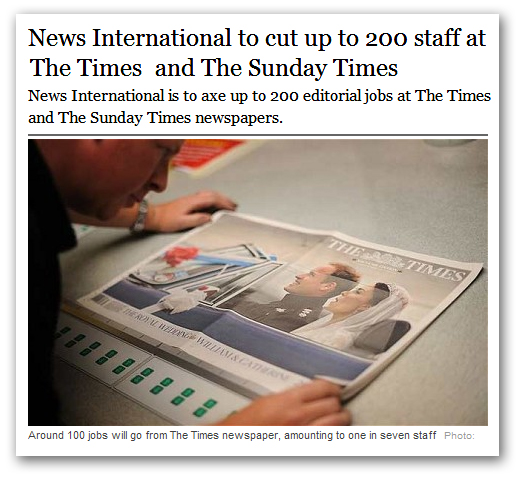 The Times has returned to circulation growth for the first time in nearly a decade, claims its editor James Harding. "We have signed up more than 110,000 people who buy the digital editions of The Times every day and, as a result, the number of people buying The Times in print and on screen is up three percent year-on-year", he says.

The consequence – or so it would seem - is that around 100 jobs will go from The Times newspaper, amounting to one in seven staff. The Sunday Times will lose up to 20 permanent staff and a third of all casuals, expected to add up to 50 to 100 job losses in total.

Actually, the big problem for Murdoch's News Corporation is a 25 percent rise in the price of newsprint, a fall in advertising and slow progress in attracting new advertising revenues to the iPad editions of the papers.

But at the heart of newsprint "crisis" is not only the soaring energy prices affecting everybody but the huge surge in the cost of newsprint as Chinese and Indian newspaper consumption has mushroomed. Thus, something has to go, and the industry is consuming its children. As prices go up, the very people who generate the content are being chopped – the deal for the consumer being less value for higher prices.

Somehow, this does not immediately grab one as the most successful of business models.