We would never have guessed 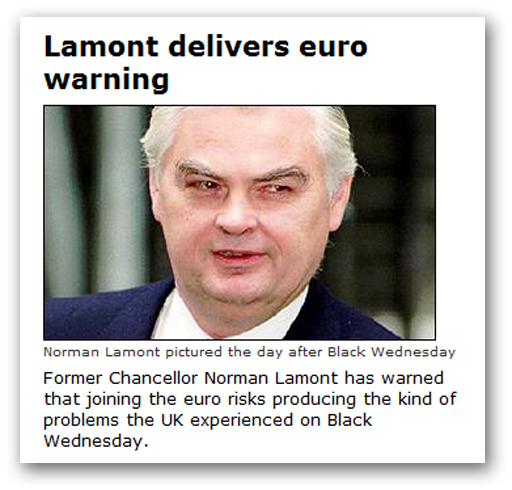 Norman Lamont is telling us in the Daily Mail why the single currency was never going to work - and how any attempt to save it now is utterly dishonest.

We could say we were shocked ... truly, deeply shocked! How could we ever have known such things without the great and mighty Lamont to tell us such things. We should bow down and shield our eyes from such scintillating brilliance.

But, to be fair, he's been saying such things for a long time - the above in 2002, on the tenth anniversary of Black (white) Wednesday.

It is quite entertaining then to revisit Heseltine's views: "Joining the euro is the next logical step in the single market. It will give a great boost to our competitiveness in Europe and simplify transaction costs or avoid them", he said.

"In contrast, staying out deters inward investment, affects the City of London and leaves us out of the mainstream of European politics". Oddly, we don't seem to hear much from Mr Heseltine these days

Go back ten years to 1992, though, and we have The Independent telling John Major that he should emerge from the Birmingham European Council with fully agreed conditions for re-entry to the ERM, duly approved and supported by the Bundesbank.

It also opined that Major should tell Conservative MPs some unpleasant truths about today's constraints on British economic and monetary sovereignty. "To undeceive Europhobes, who live in a world of their own imagination, will not be easy", it said. "They seem to think Britain is a large enough economic entity to behave like the United States or Japan. They should know better".

This is almost twenty years ago, and it is hard to conceive that the paper could reprint such unmitigated tosh without being laughed out of court. Yet it was to do so again with climate change, proving that there is no fool like a media fool.

But then, even a few months earlier and we had er ... Norman Lamont supporting his stance on the ERM. Dishonesty, it seems, cuts both ways. But the villain now becomes the hero of the hour. Next step John Major, hero of Maastricht?