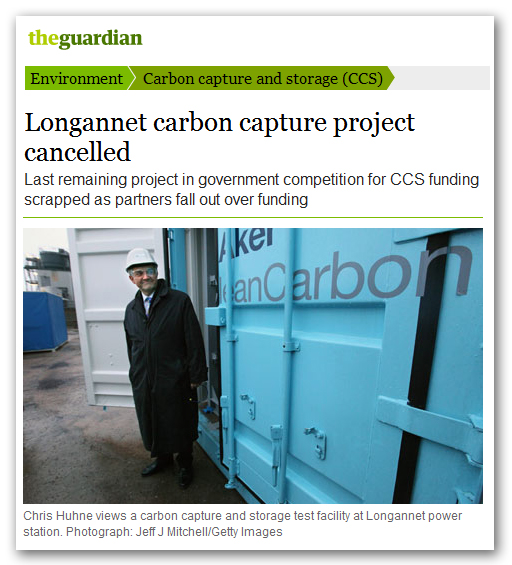 We said it was a stupid idea at the time, and that the maths did not stand up. Subsequently, on 23 April 2009, as the dying Labour administration embraced the technology and the Tories cried out for more, we observed that this was nothing more that a "cynical and meaningless" ploy to keep the Greenies on board.

So it has come to pass that Longannet, the flagship scheme for carbon capture in the UK, has been junked, despite the availability of £1 billion funding from this moronic administration. And since it is the only remaining project in the running for CCS funding, that makes it about thirty months from inception to total collapse of this absurd policy. God only knows how much money has been wasted on it.

With this though, and many other issues, we begin to see the Green agenda unravelling with increasing speed. Despite the continuing flood of scare stories, they no longer have any heat or political traction. The scare is dying on its feet.

The really interesting thing here are the political implications – at national and EU level. As the agenda slides towards oblivion, The Boy's credibility can only be damaged, even more than it is already. Far from being the husky-hugging greenest government ever, it may well go down as the administration that finally junked the Greens.

At an EU level, though, this is even more interesting. Very early on, the EU commission latched on to Eurobarometer findings that pointed up "environment" as the issue on which approval ratings were highest. The Green agenda, therefore, has been harnessed in the service of European political integration.

It is unlikely, however, that the commission will be sufficiently astute to realise that the bottom has fallen out of the market, and the institutions are not in any case flexible enough to accommodate rapid change. Thus, the impetus for scaling down the agenda is going to come from member states, further weakening the integrationalist pressure.

We have, therefore, a situation where the EU has wrapped itself in a beneficial crisis that is, for its purposes, no longer beneficial – without the means rapidly to extract itself from it. Carbon capture was one of its dreams. It, with the UK government, are looking foolish for promoting the nonsense.

And from here, the only way is down. What should have been an asset is now becoming a liability.