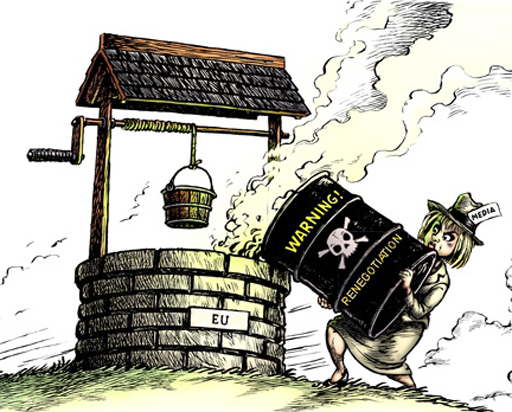 Warner awakes, with this: "On Europe, as on most other issues, you could not put a cigarette paper between the main parties. The new politics is no longer a contest between rival party ideologies but between the political class and the public it despises".

What he is describing, of course, is the "above the line" phenomenon that we wrote about at the beginning of this month. It is fascinating to see that different people, entirely independently, are coming to the same conclusion.

And, talking of conclusions, Autonomous Mind looks at the forthcoming referendum debate and concludes that the renegotiation option is poisoning the well – behaviour common to retreating armies. (unashamedly, I have borrowed his pic).

Typical of the genre is Bernard Jenkin in the Failygraph, yet another MP bleating about the government taking back power from Brussels. Whether intentional or not, he and the likes of George Eustice will ensure that the debate goes nowhere. By Wednesday, the issue will be yesterday's news, parked, and forgotten ... which was perhaps the intention all along.

Unsurprisingly, d'Ancona notes that Eustice – once Cameron's press secretary – "has earned the discreet gratitude of No 10" for his handling of the issue and is now the one rebel who's still got a good chance of promotion. Poisoning wells, therefore, has its reward. Expect Eustice to be a PPS within six months and a junior minister before the end of The Boy's reign. He has served his master well.