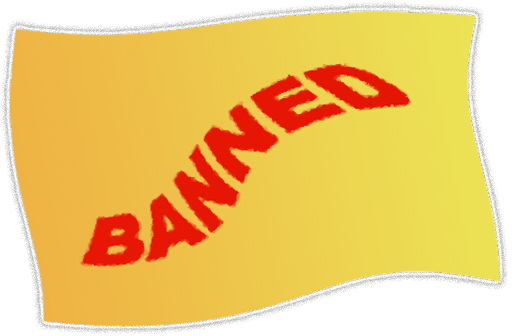 Compounding their anti-democratic behaviour last month, Bradford MDC has now "reviewed" its own decision not to supply me with information under the Freedom of Information Act and gone even further, effectively banning me from asking any questions about Council Tax.

This is via Dani Mistry, Bradford's "Freedom Of Information & Strategic Support Officer". Noting my assertion that:

The subject matter of the questions addresses allegations of illegality” and possible fraud undertaken by officers of Bradford MDC, the purpose of which is to ascertain whether actions taken by officers are lawful and legal, with a view to making that information public …

I am then told that, "having visited/emailed the police, Councillors, complaints officers and received the same information i.e. the Council did not act illegally linked to sending requests without waiting for replies and I have therefore concluded that the questions themselves were of little importance to you and so of no value".

Poor little Mistry has thus got rather confused. He (or she?) has elided the issue of unlawful behaviour of the bailiffs (about which I have complained) with the issue of potentially illegal actions by the Council in overcharging for Council Tax summonses and liability orders, to which the FOI requests mainly refer.

Bradford MDC, therefore, has got itself in rather a pickle, making a fundamental mistake in confusing two separate lines of inquiry. I have not received any information from anyone about the illegality of councillors in respect of charges. Bradford is thereby refusing to answer FOI requests on grounds that simply do not apply.

Further, Mistry having concluded that my requests were vexatious, then informs me (with execrable grammar) that "Bradford Council will not respond to any further requests from you that relates to council tax collection and bailiffs". 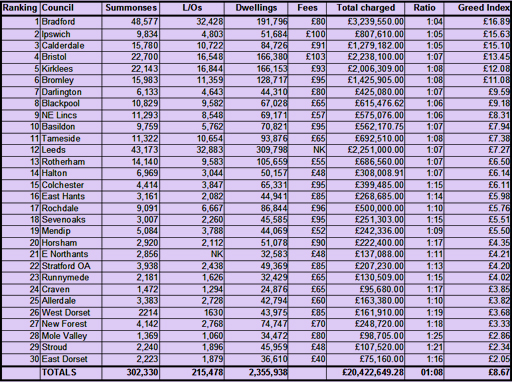 With more FOI requests on charges having come in (with many to process), the update (above), with now 30 local authorities, perhaps illustrates why Bradford is so sensitive.

We are now close to a ten percent sample (albeit not properly randomised), which still has the council on the top of the league, sending out twice as many summonses as the national average, and pulling in cash at twice the national rate (measured as average per household – the basis of the "Greed Index").

Interestingly, in the top five, there are three West Yorkshire councils, which might suggest a certain amount of collusion. The span of charges alone, however, would seem to rule out any idea that all councils are recovering "costs reasonable incurred", and are treating this as a money-making opportunity.

The response of Bradford, of course, makes life a little more complicated, as we are now going to have to complain to the Information Commissioner. That is going to have to wait until I get back from the menders, but I have already checked with the office – I have six months to submit a complaint.

The council though is still scary. We have people here who, if they actually understand the meanings of the words "democracy" or "accountability", are doing their best to ensure that neither apply on their patch.