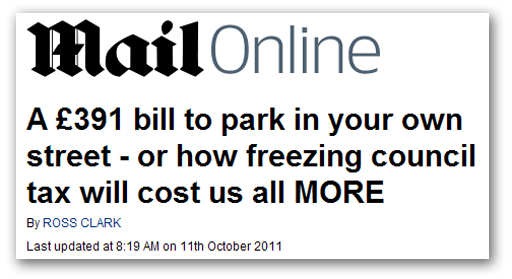 Ross Clark has seen the point - that council charges are side-stepping the cap on Council Tax. He adds some useful colour and detail, but he and the MSM have a lot of catching up to do. They haven't yet latched on to the scale of the looting, much less the illegality.

But then, you can only expect so much of sleb writers. The fact is, though, that they are trailing in the wake of their own commenters, and have read neither this blog nor the Booker column - which would have strengthened the story immensely.

But at least they have noticed something amiss, which is more that the politicians and the ra-rah Tory sites have done. I suppose they are waiting for the brilliant Carswell and Myrtle show to tell them what to think.

There is no sign of the "groundbreaking" TaxPayers' Alliance either. Still, they have just discovered "Europe", so their little brains have probably overheated. But they're sooooooooooo in touch with public opinion, says Timmy (above), so they'll get round to discovering this issue in due course. Then we can all stand round and applaud their brilliant brilliance for noticing it months after everyone else.

Meanwhile, in the real world, you only have to read the comments of real people to realise how serious this issue is.  But then, if you are above the line, you don't deal with grubby little oiks and real-world issues. One is so important that such matters cannot be allowed to tarnish one's brilliance.

What these precious little above-the-liners don't even begin to understand, though, is how close to the edge some people already are, as the predatory bailiffs gather for their prey, keeping the money flowing to top up the salaries and pensions.

Nor do they realise that the state police have become a revenue protection agency, their first concern to gather income, which comes well before any duty to fight crime or protect people and their property. The plods are now the main threat to our safety and prosperity.

Still with our money, councils are happy to throw huge sums at vanity projects and green insanity, such as here, with Hull city council throwing £10 million at capital projects such as a scheme to kick-start wind turbine manufacture – money which goes straight into the pockets of German-owned Siemens.

Any idea that councils have any duty to provide services, such as schools, for which we pay them, has long gone out of the window, with this couple being told to teach their own child, because there was no place for her in the local school.

The only inventiveness we see coming from local government is more and more ingenuity in devising ways of extorting money, with road charging and tolls back on the agenda. And, as always, there are the old favourites, ripping off the motorist with more and more parking charges.

This is the developed world, though, where we roll over and whinge. They seem to have a better handle on it in Lahore, where two motorway policemen were beaten bloody by a gang of lawyers at the Lahore High Court (LHC), because they had ticketed a lawyer for speeding. Now there is true localism for you.