Fox on the run 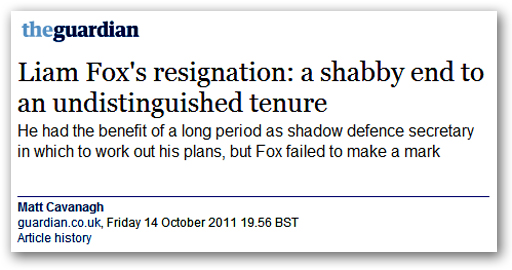 There are several good reasons why greater attention (and credibility) than normal should be given to this piece by Matt Cavanagh.

I can't tell you all the reasons because, if I did, I'd have to kill you. Suffice it to say that although Matt is currently an associate director at IPPR, he was an "adviser" on defence to the government between 2005 and 2010.

However, he was not an advisor in the Werrity sense. Rather, he was a fully paid-up SPAD, with top security clearance, working in the highest reaches of Whitehall, first in the Defence Ministry as advisor to Des Browne and then from the Cabinet Office as Gordon Brown's personal defence and security advisor.

Although his name is barely known within the Westminster bubble, this man is a former Oxford don, a rare intellect and no stranger to controversy, with a unique appreciation of defence policy, having seen it from the very highest of levels.

Personally, I think Matt has been rather gentle about Fox, but his analysis – worth reading in full from its original - makes a welcome antidote to the fawning sycophancy that we see in Tory and media circles.

What is especially helpful is the insight on the strategic defence and security review (SDSR), conducted by Fox. What must be remembered is that, as shadow defence secretary, Fox had four and a half years shadowing the brief in which to work out his plans.

Yet, throughout that period, it was evident that there was a policy vacuum on the Tory front benches. And, as we explored this further, the more alarming it became. Fox's speeches in the House and elsewhere lacked strategic dimension, to the extent one got the feeling that he was talking the talk but never really understood what his speechwriters were putting in front of him.

Thus, as Matt points out, after Fox became defence secretary in May 2010, it soon became clear that he lacked any real blueprint for what he wanted to do. As a result, the process degenerated into a fairly superficial spending review, with little focus on strategy. Officials complained that neither he nor the new National Security Council gave them useful guidance.

Most significant of all, though, was Fox's failure to break free of the familiar end game in which the big decisions were left to haggling between the chiefs of the three services.

The most infamous example, the decision to scrap the Harrier, thereby leaving Britain with aircraft carriers with no aircraft to fly from them, makes no sense from either a financial or military point of view – until you realise that it saves face for both the navy chief, who got to keep the carrier, and the RAF chief, who got to keep the Tornado.


Even viewed in more limited terms as a spending review, the SDSR failed: it did not close the budget gap, let alone create any headroom to allow the MoD to respond to new events and trends. It hid behind over-optimistic assumptions about "efficiencies", which were not underpinned by serious analysis, and soon unravelled.

After a few months the gap reappeared, and programmes which had been on ice since the election remained embarrassingly frozen. After protracted wrangling between the MoD and the Treasury, Fox was forced into a hasty announcement of further massive cuts to the army, a mere nine months after the SDSR.

Reviewing the rest of the Fox legacy, the brightest hope is the procurement reform programme Fox set up under Lord Levene and Bernard Gray. If that can succeed where the SDSR did not, if Levene and Gray can tackle the systemic failings – the bureaucracy, the inter-service haggling, the tendency to spend money on the wrong things, and the ever-increasing unit cost of fast jets, surface ships and submarines – then some of the sacrifices and reductions in capability which Fox presided over may come to seem justified.

If they do not, concludes Cavanagh, history's verdict is likely to remain unkind. And that is where he is too kind. In fact, while procurement is and has been a significant problem, the far greater problem is one of definition – deciding what you need to buy, and why.

It is here, with his absence of strategic grasp, that Fox has left the MoD almost bereft of guidance, "inspired" by nothing more than the limited vision of an over-ambitious and ultimately failed politician who, at the outset came to politics as a country doctor and was never able fully to escape this narrow and self-limiting background.

Should history be kind enough even to remember him, it will brand him as a nonentity who did not even manage to make a decent failure of his brief. Yet this was a man who would be prime minister. Armed only with ambition, but not capability or humility, he has flown too close to the sun.