I am not going mad 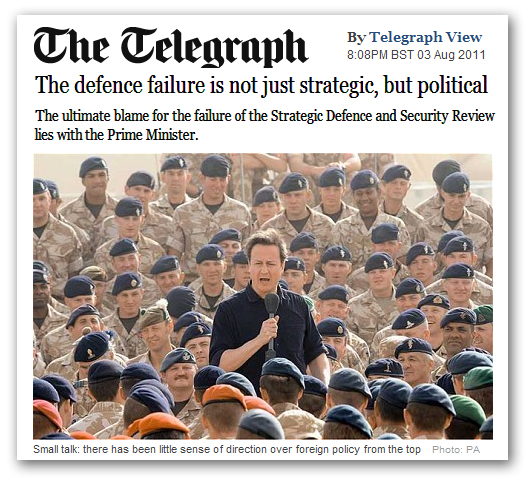 … but, as I read with growing incredulity, the mounting eulogies, about the latter-day saint, Liam Fox, to say nothing about the staggering drivel being written on the subject, even I begin to wobble.

On that, I had a recent talk with one of my bestist friends, the Dellers, who did point out that I am agin an awful lot of things and people. So, with "everyone else" singing the praises of Fox, how is it that I (and Booker) can claim to be right in assessing him as a loser?

Then you have to do a double-take. Earlier this year, the general consensus was that the SDSR had been botched. As recently as August this year, even the mighty Telegraph was saying: "This newspaper has warned repeatedly that the SDSR was botched because it was driven not by strategic requirements but by cost-cutting" (piece illustrated above).

And now, after being driven out of office under the tawdriest of circumstances, he becomes the great hero? Why? What is going on here?

The clue might be in the fatuous Montgomerie. Fox has been the champion of the enfeebled Tory "right", who have taken him to their hearts. To admit that their hero has feet of clay - that he always was a low-grade loser - is to admit that their judgement is flawed. That will never do, so history has to be re-written.

But I am not wrong on this. As we pointed put earlier, the SDSR was a failure. And while the strategic direction from Cameron was indeed seriously lacking, much of the failure must be put down to Fox.

That the Tory "right" and its supporting media cannot see straight on this is thus a reflection of them, not me (or Booker). Furthermore, if anyone can't see that a secretary of state who indulges is such a tacky relationship with his associate isn't fundamentally a wrong un, they need to think very seriously about themselves.

All this seems to be part of the political malaise from which we are suffering, though. But if we take our political thinking from the sad crew who can't see straight or think straight, then we are a sad bunch as well. And yes, I'm agin a lot of things … but there are a lot of things to be agin.