The charge of the councils 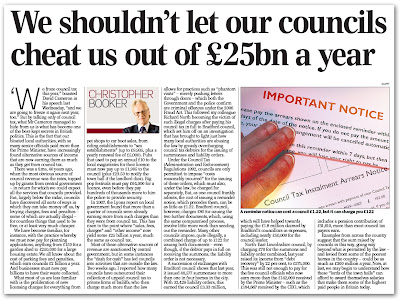 "We froze council tax this year", boasted David Cameron in his speech last Wednesday, "and we are going to freeze it again next year too". But, by talking only of council tax, Cameron has managed to hide from us is what has become one of the best-kept secrets of British politics.

This is the fact, writes Booker, that increasingly in recent years our bloated local authorities have found alternative sources of income which are now earning them as much as they get from Council Tax.

Building on our work, he brings to a wider audience the developments from 40 years ago when the most obvious source of council revenue was the rates, topped up by grants from central government - in return for which we could expect all the services which councils provided.

Largely below the radar, councils have now discovered all sorts of other ways in which they can take money off us, by levying charges, fees and penalties for countless things which used to be free or at least very much cheaper – some of which are actually illegal.

We have become familiar, for instance, with the practice whereby we must now pay for planning applications. I think it would come as a surprise, though, to anyone not familiar with the system that you can find yourself having to pay anything from £150 for a garden shed to £250,000 for a large housing estate.

Of course, we all know about the cost of parking fees and penalties, which earn councils £2 billion a year, and businesses must now pay councils billions to have their waste collected, while tipping fees have gone through the roof.

But what most of us are less familiar with is the proliferation of new licensing charges for everything from pet shops to car boot sales, from riding establishments to "sex establishments" (up to £9,935, plus a yearly renewal fee of £5,000).

Pubs which used to pay a yearly £10 to the local magistrates for their licence, must now pay up to £1,905 to the council (plus £23.50 to notify the council if the landlord dies). Big pop festivals must pay £64,000 for a licence, even before they pay hundreds of thousands more to hire the police.

In 2007 the Lyons report on local government found that more than a quarter of councils were already earning more from such charges than they were from council tax, and this has now risen to the point where "sales, fees, charges" and "other income" now yield £25 billion a year, much the same as Council Tax.

Most of these alternative sources of revenue are sanctioned by central government, but in some instances the "dash for cash" has led councils into activities which are outside the law.

This is the Summonses and Liability Orders scam, where under the Council Tax (Administration and Enforcement) Regulations 1992, councils are only permitted to impose "costs reasonably incurred" for the issuing of these orders, which must also under the law be charged for separately.

Booker picks up on one council admitting that the cost of issuing a Reminder Notice, which precedes them, can be as little as £1.22. Yet, as we know, Bradford council charges £80 for issuing the two further documents, which, using the same computerised process, involve no more work than sending out the Reminder.

Many other councils, quite illegally, impose a combined charge of up to £100 for issuing both documents - even though, if the debtor pays in full on receiving the Summons, the Liability Order is not necessary.

In the column, Bradford details spill out, but with 21 verified FOI responses now in, the city remains firmly lodged at the top of our "greed index". The point is made. Now at last, says Booker, we may begin to understand how these "lords of the town halls" can afford to award themselves salaries which make them some of the highest paid people in Britain today.

Nevertheless, these charges will be their undoing. Their greed has got the better of them.