Not in a million years 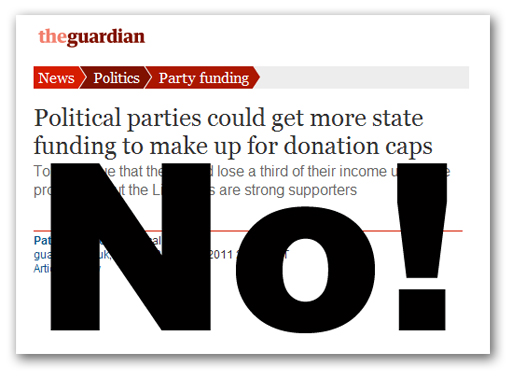 A huge increase in state funding of political parties, worth up to £100m over a five-year parliament, is being proposed by a government-commissioned inquiry.

Says The Guardian, the funding, which would be shared out according to the number of votes each party receives in a general election, would be presented as a way of compensating them for a huge loss of income as a result of introducing new caps on individual donations to parties.

And the answer is a most emphatic No! These parasites do not represent me, they do not get my votes and I owe them nothing. I do not agree with them, their values, their aims or even their claims to be entitled to exist. If they cannot survive unaided (and that includes the money they already get), they should perish.

The bubble-dwellers have no mandate to take our money for their political parties. They may have the power to do it, but it would still be theft … and another nail in their collective coffins.