On top of their game? 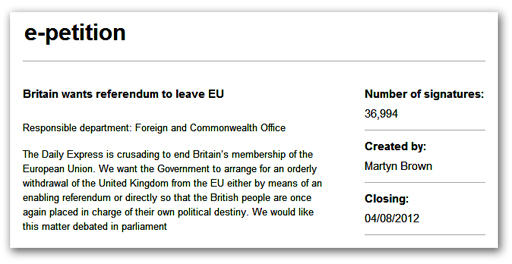 A number of MPs in the EU Referendum debate refer to it coming about as a result of the e-petition reaching the 100,000 level. Included in that number have been The Boy, Kate Hoey, Zac Goldsmith, Mark "the mouth" Pritchard, Douglas Carswell and Martin Vickers.

But, as The Guardian helpfully points out, the debate is happening because the backbench business committee, which was set up after the general election to allocate time for backbench debates, decided to grant David Nuttall's request for one.

Nuttall's case was supported by the fact that more than 100,000 had signed an old-fashioned paper petition submitted to Downing Street. But his application had nothing to do with the new e-petition procedure. The only e-petition, sponsored by The Daily Express has attracted only 36,994 signatures.

It might be a small point but you would think that MPs – at the heart of Westminster – would actually know such things. And if we can't rely on them to get such details right, how can we rely on them to understand – or articulate – the complex arguments relating to membership of the EU?

In fact, we cannot. Jimmy Hood opened the case against the motion by saying that many of the arguments, which he had heard so often, had scarcely changed. And indeed they haven't. It is as if time has stood still – on both sides.

Should we have actually had a referendum campaign, the British public would have switched off in their droves long before the vote. These people simply have not developed, have not moved on. They call themselves our representatives, but nothing in this debate gives us any confidence that they are capable of representing us.

Switch on – listen to the dross … switch off. MPs are no longer part of the debate. Any change is going to happen without them - in spite of them.