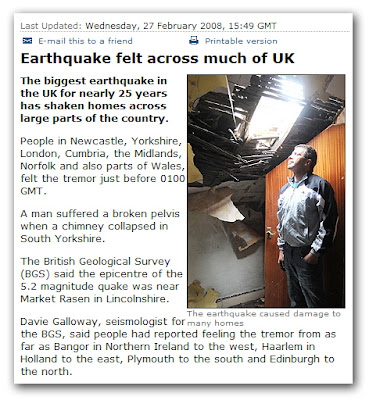 I suppose that, if you call a couple of minor tremors "earthquakes" and then let the Greenies loose, you can make a non-event sound quite serious.

Those with slightly longer memories, however, may remember the great earthquake of 2008, with an earth-shattering magnitude of 5.2. I remember it well, as the shelves rattled for a second or two. And that was it – although some houses further south were damaged, and one lad was injured.

By comparison, the magnitude 2.3 tremor which "shook" the North-West last April, and one the following May, with a magnitude of 1.5, were barely detectable to human senses, the strongest being a thousand times less powerful than the 2008 episode.

That Huhne should be making a big issue out of these minor tremors, therefore, is absolutely bizarre – one might almost think that he did not want Britain to benefit from an estimated 200 trillion cubic feet of shale gas – preferring instead the more expensive and less reliable windmills.

And even if the process of fracking does cause some minor damage to buildings, why does this matter? Systems for remedying mining subsidence are well established, and the processes could easily be transferred across.

Fortunately, as Dellers observes, even the media and other clever-dicks are beginning to notice that there is something rather odd going on with the Cleggeron energy policy.

It was rather different three years ago, when they hadn't yet discovered the subject. But we should be thankful for small mercies. Now, rather than switching energy providers – as that idiot Huhne wants us to do – all we need is to switch energy ministers. Noddy or Kermit would do as an alternative. Anything would be better than Huhne.