The road to war 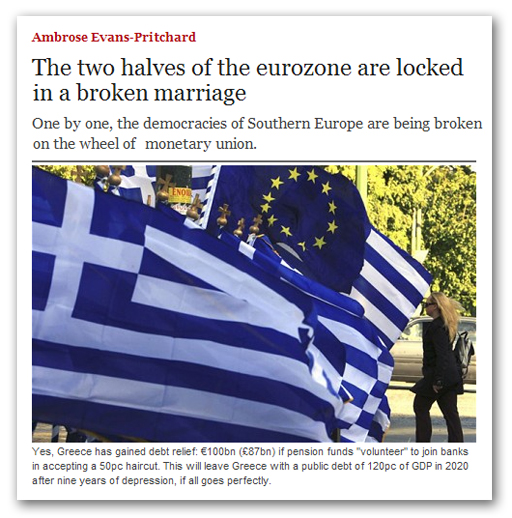 In his latest article, Ambrose makes the points that we all could have made, but chooses the analogy of a couple locked in a loveless marriage. Then he, Autonomous Mind, Zerohedge and The Daily Mail - twice - make the point about the increasing propensity to violence.

We are then reminded of Merkel's warning that euro failure threatens a thousand plagues. "No one should think that another half-century of peace and prosperity is assured," she said. But she has the matter backwards, Ambrose says. "The euro itself has become an engine of destruction and cross-border rancour. Europe will not be happy again until this misguided experiment is shut down".

The tragedy, though, is that Merkel – knowing only the propaganda version of European Union history - does not realise that the experiment had failed before it had even started. The birth of what is now the EU is put in the immediate aftermath of the Second World War but, as we know, the intellectual genesis – at the hands of Jean Monnet and Arthur Salter – was established in the 1920s, in the aftermath of the First World War.

As a construct intended to prevent a European War, it was therefore intended to prevent the Second World War. It failed the moment Hitler came to power yet, despite that failure, in the post-Hitlerian wreckage of Europe, Monnet dusted off the same plans and applied them to preventing a war that was never going to happen.

Thus do we have Merkel trapped in a false paradigm, desperately trying to hold together a construct that was designed to avert an historic war that it could never have stopped – and did not. And not only was it irrelevant to that task, it has now become the very source of instability that the Frau so desperately seeks to avoid, making her efforts hopelessly counter-productive.

We should learn our history, they say, for fear of repeating it. But when history becomes propaganda and we learn the wrong history, the repeat comes upon us without us appreciating it for what it is. Sadly, then as now, that "repeat" is the road to war – albeit of peoples rather than armies. That much will be different, not that that is any consolation.