They just don't get it 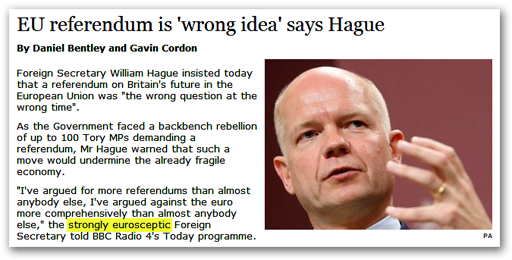 Here we have the luvvies from The Independent, joined by the Failygraph fools, describing Hague as "strongly eurosceptic". Not only is the "bubble" a real phenomenon, we see here how the bubble-dwellers use a different language. Some of the words are the same, but they have completely different meanings.

But, in 1999, Steve Richards, then chief political commentator for The Independent wrote in The New Statesman: "The Conservatives are playing games with the political implications of Britain's membership of the EU depending on their latest opinion poll findings …".

Then and now, that is what they are doing. Whatever the rhetoric, William Hague is genuinely committed to membership of the EU, and has been consistently so, even in May 1999 arguing:


The British people believe that Britain's place lies firmly within the European Union, but that we should work to make it the right kind of European Union. This should be a European Union which does less but does it better …

The underlying commitment to membership destroys any claim to being a eurosceptic. Yet, after more than a decade of fudge, Hague retains his media reputation. Thus is the language perverted and the arguments totally distorted. How can there be a dialogue when we cannot even agree on the meaning of words?