The limits of green 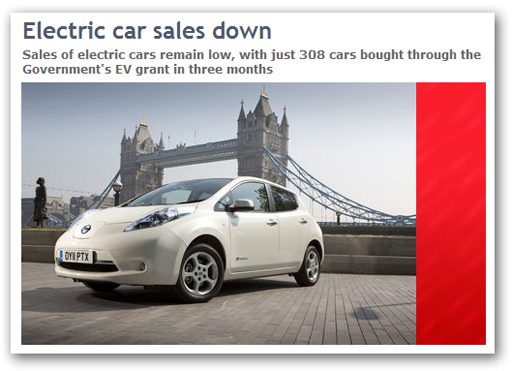 Offer a car at three times the price of a normal run-around, with the acceleration of a one-legged squirrel and the range of an inebriated slug, and what do you get?

Well, despite the government offering £5,000 of our money to every idiot who is prepared to buy one (excluding the corporates who are using other people's money), you end up selling just 308 models during the third quarter of the year. Just 465 electric vehicles were registered in the first quarter, and the number more than halved to 215 in the second.

Earlier, it was understood that around three quarters were bought by businesses, and if that figure holds up, it means that less than 250 private individuals have actually been stupid enough to part with money.

The real stupidity, therefore, has been on the part of the Cleggerons, who have allocated £400 million for this madcap project, covering not only car subsidies but a network of charging points.

With a national car fleet of 28 million vehicles, though, it is going to take just a little bit of time to replace it with electric vehicles … at this rate, more than 20,000 years – assuming none are scrapped of written off in the interim.

This has not stopped Boris the Buffoon planning to spend about £60 million of Londoners' money on a network of at least 1,300 public charging points across London by 2013. This man is seriously expecting London to have 100,000 electric vehicles "as soon as possible", although even a hundred years would be wildly optimistic.

What this shows up all too plainly is that there are real limits to the commitment to the green agenda, when it comes to expecting people to cough up their own money. You can thus see why the Greens are so keen on compulsion. People may support the madness in principle, but they are not prepared to pay for it.