It was always going to be 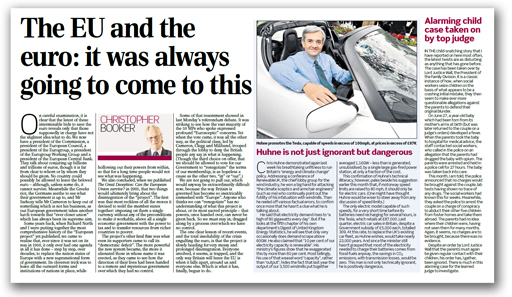 It helps, just occasionally, to stand back from the breathless reporting of events and remind ourselves that the euro – and ultimately the EU – was always going to fail. And that is what Booker does in his column this week, and if he is blowing our own trumpet.

We thus concluded, when we published The Great Deception, that two things would ultimately bring about the disintegration of the “project”. The first was the most reckless of all the moves it devised to weld the member states together: imposing on them a single currency without any of the preconditions to make it workable, above all a single economic government with the power to tax and to transfer vast resources from richer countries to poorer.

The project's other fatal flaw was what even its supporters came to call its “democratic deficit”. The more powerful the new system became, the more it alienated those in whose name it was erected, as they came to see how the direction of their lives had been handed to a remote and mysterious government over which they had no control.

Whatever the prattling of idle – and often ignorant – hack, therefore, the one clear lesson of recent events, and the total insolubility of the crisis engulfing the euro, is that the project is slowly heading for very messy and prolonged disintegration.

Everyone involved, it seems, is trapped, concludes Booker. The only way Britain will leave the EU is when it falls apart, around us and everyone else. Which is what it has, finally, begun to do.