This England of ours 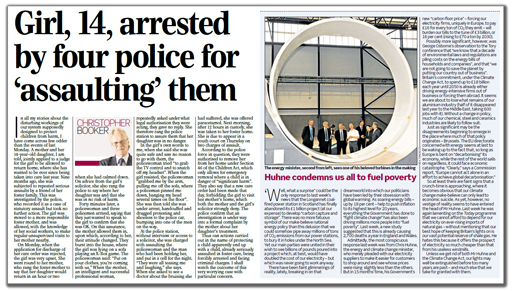 There is no dispute over the basic facts of this first story. The police admit them. Essentially, four constables attended a private address, ostensibly to remove a 14-year-old girl from her own mother, asserting that she was in danger of "significant harm".

When the girl did not want to go with the police, they restrained her, handcuffed her, and then forcibly removed her. They then charged her with "assault" - interviewing her without a parent or guardian present, in contravention of the rules – and locked her in a cell for 12 hours.

This is England, our England – one of windmills, bobbies on bicycles, rank bloody stupidity, indifference and state violence. If I thought armed revolution was the answer, I'd be advocating it. But we're going to have to play it a bit more canny than that.

However, if there are any happy souls out there who don't think we have a problem, I really would like to share the substances they are on – just for the next week or so.