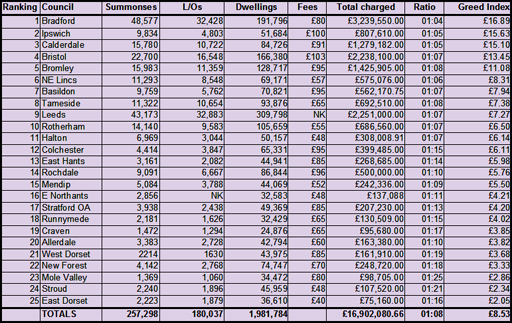 The Daily Mail continues to pick up on the theme of council charges, highlighting the increases in charges for burial plots. Death and taxes are not only certainties – but are coinciding. It cites Caerphilly in South Wales, where the cost of burial plots will more than double over the next five years from £1,043 to £2,437. In Watford, the paper says, the price for plots doubled from £405 to £810 in April.

While that paper is to be commended for raising the issue (no other nationals seem to have noticed, apart from the ST with Booker), what it does not seem to have realised is the scale of these charges.

As of 2009-10, they exceeded £25 billion for the first time and, with the current torrent of charges being announced – increasing at a rate of well over a billion each year - we will see the total income exceed that of Council Tax.

Effectively, that means that the true rate of local taxation – albeit heavily disguised – is twice that of the headline Council Tax rate, costing households an additional £1000 a year on average, with no real say on how the councils spread the burden.

The relationship between Council Tax and charges is seen clearly in this report, where a "freeze" on Council Tax in Sheffield – following a grant from central government of £4.9 million – is translated into an increase of charges "by up to three per cent".

On the other hand, the weakness of central government is seen in a statement from Housing Minister Grant Shapps. He warns councils not to use local people as cash cow. "If local authorities cut excessive chief executive pay, share back offices and root out wild overspends they can safeguard frontline services", he says.

With that, local authorities are already intent on milking their residents for as much as they can get away with, and our updated "Greed Index", now with 25 councils, shows that many are not fussy about the source of their money.

This is not quite a ten percent sample (although it probably covers ten percent of the householders who actually pay Council Tax), and nor is it properly randomised. But, on the basis of what we have collected so far, we seem to be looking at an impost of about £220 million last year. This current year, the amount will probably be closer to £250 million, with so many councils having increased their charges.

What, of course, distinguishes the charges here – for summonses and liability orders – is that the larger part is undoubtedly illegal, amounting to a structured theft in excess of £200 million each year.

From the latest figures, what also comes over is the huge range of charges. Bradford – which stays at the top of the league – extracts £16.89 per capita, more than eight times the average amount levied by the lowest (East Dorset), on £2.05 – and twice the overall average.

Returns continue to be slow coming in, and many are still incomplete, but the process goes on and we will continue until it is complete – even if every one of the defaulters have to be referred to the Information Commissioner.

The fundamental point illustrated by the Index, though, is that councils have become so greedy and so arrogant, that they have lost sight of the law and are stealing money. And this gives us the opportunity to challenge them in the courts, which is currently in the planning stage.

But it also illustrates our original premise that councils, and their spending, is out of control. Grant Shapps demonstrates that central government has no real control, and if anyone really thinks the electoral system gives voters any better control, then they are in the land of a fayries.

As local government accounts for nearly one quarter of public expenditure (£162 billion in 2009-10), the idea that there such be such slender control over such large amounts of money is unacceptable. And the longer term answer to that is obvious.