UPDATE: The euro fell as investors awaited details that will not be forthcoming until next month ... says Reuters. Bruno Waterfield tells us: "No news of pressers here. Deeply boring and depressing - hoping to see a paper draft soon. I can give a nerdy update on the EFSF - but I feel like weeping with the tedium as I write".

Gisela Stuart says: Nothing in life is inevitable – indeed, when consensus breaks out, as it did over the single currency, the only thing that is certain is that they're all wrong (climate change anyone?).

You just can't expand on that, and would be foolhardy to try. So I'm going to keep this post running on top, as we chart the decline and fall. Perversely, the "colleagues" can't even decide whether they are a farce or a tragedy, and end up being both. When there is something more to say, that is actually worth saying - instead of the torrent of extruded verbal material (EVM) - then I'll say it. Meanwhile, the forum link gives some useful insights. 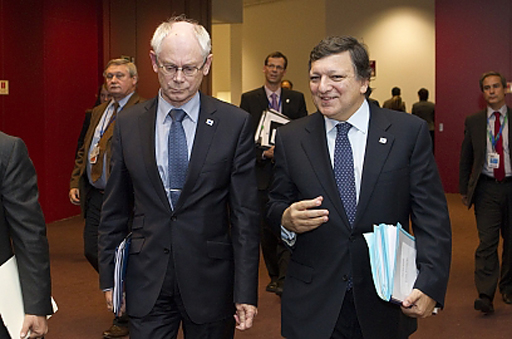 UPDATE: Statement by heads of state: "Measures for restoring confidence in the banking sector are urgently needed and are necessary in the context of strengthening prudential control of the EU banking sector". You don't say.

UPDATE: It is now official - SPIVs rule the EU. The bail-out fund will be used to partly insure debt, and to attract private and international public investors through a "special investment vehicle" or SPIV. Yet, we know that already.

UPDATE: The lack of an agreement with bondholders on the size of their Greek "writedown" - as they are now calling it - is making the euro rescue plan almost impossible to finalise. This, says the FT, "complicates" the final leg of the deal, recapitalising European banks, which need the beefed-up fund as a backstop. Talks are, therefore, expected to continue beyond today ... are we shocked?

And the leaders of the EU member states which are not in the euro, including Britain, have left the meeting, leaving eurozone members to do the biz. The Boy can have a swift fag behind the bicycle shed, while the "colleagues" spend our money.

UPDATE: George Papandreou, the Greek premier, in Brussels, says: "the Greek people are making superhuman efforts to put our house in order" – they expect European leaders to recognise that and reciprocate. "Now is the time for the European leadership collectively to end the uncertainty, end the crisis, turn the page and make sure we make a big step forward into a better future and prosperity for our peoples in Europe." he adds.

UPDATE: And "if the euro fails, Europe fails", says Merkel. ... er ... I think we knew that. Then: European leaders should agree to a deal that will result in a write-down of half of Greece's huge national debt, she told the German Parliament. There we have it ... after all the rhetoric about no Greek default, Merkel is actively advancing default as a way out of the mess. Denials in this business are just tools of the trade. You believe these people at your peril.

UPDATE: "Markets rise after Bundestag approves use of bailout fund as a form of insurance against other loans to tackle the eurozone debt crisis and stresses Germany will pay no more than the €211bn agreed". The Boy says "contagion must not be allowed to spread". And he is going to stop it how? Meanwhile, John Monks thinks (and I use that word loosely) we should join the euro.

UPDATE: Ambrose with "raw politics". Europe's debt crisis has taken a deeply political turn as parliamentary battles rock Italy and Greece and once again cause simmering dissent in Germany, vastly complicating the search for a workable solution, his piece goes. 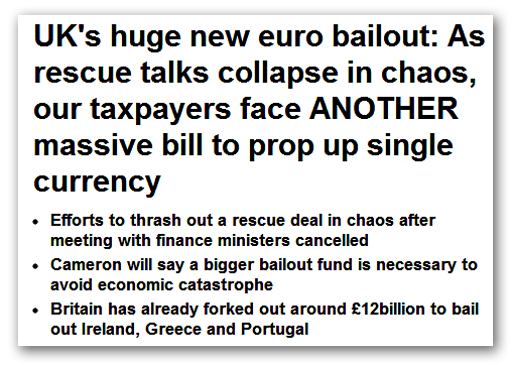 Britain was facing a new multi-billion-pound bill to prop up the euro last night as the single currency teetered on the brink of collapse, says The Daily Mail. It is not the end. It is not the beginning of the end. But it may well be the end of the beginning. There is no way back.