Were they misled by the Met Office? 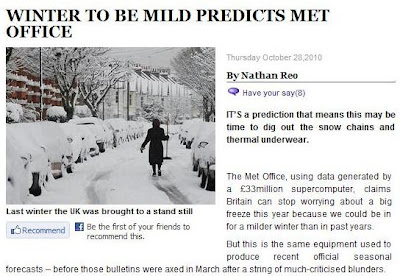 Dr Vicky Pope – the Göbbels of the Met Office - puts this current freezing weather down to "climate variability", telling us that our senses are deceiving us. If you look at the long term trends, we are in fact experiencing fewer freezing winters and more heatwaves, she says.

This follows suggestions from the self-same Met Office, offered at the end of October, that we should expect an "unusually dry and mild winter" – a prediction which famously relies on the same computer systems which produce the models for global warming projections.

Now, as Britain grinds to a halt, we hear that the government has ordered "an urgent audit of the country's snow-readiness". Amongst other things, transport secretary, Philip Hammond, says there is "no excuse" for poor communication with stranded motorists and passengers.

What might be more productive to investigate, however, is the degree to which the various authorities have been totally misled by the fools in the Met Office (again), and how much winter budgets have been trimmed as money is siphoned off into "climate change" projects.