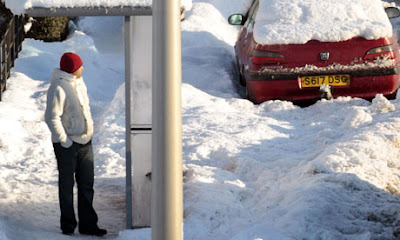 Doubtless, the focus of the London-based political wonks and media is currently the tuition fee controversy. But, in the long run, this will turn out to be of marginal and transitory importance. By far the more important issue is the weather and, in particular, the news that the Scottish government is considering calling in the Army to deal with the crisis.

This is after the recent snowfall in Edinburgh, the heaviest the city has seen for about 50 years, with temperatures expected to stay resolutely below freezing throughout Scotland - and elsewhere in England where we have just experienced the coldest period since records began in 1659.

The warmists may have an explanation for this which satisfies their own acolytes and which looks vaguely plausible from a scientific point of view. But most people are not scientists, and their trust in the warmist dogma has reached record lows, matched only by the low temperatures. It might be said that there are no atheists in the trenches, but there are certainly no warmists in the snowdrifts. And with Cancun also suffering record lows three days in a row, global warming as a credible concept is shot to pieces.

The politics and media wonks, however, have never really understood how intensely political warmist theology is. Obsessed with their own narrow concerns, they will therefore fail to recognise this turning point for what it is. But from this point onwards you will see a stiffening of resistance to the burdens imposed by the politicians in the name of saving the planet, together with increasing hostility to the warmist message and its supporters.

Thus, what we are seeing currently is not just bad weather but a uniquely political event, the effects of which will be as profound as they are unrecognised. Yet, even as one forecast suggests an intensification of conditions, we have that suicidal idiot Lord Stern wanting to levy an annual £15 billion Green Tax - costing an average £600 per household - to buy windmills and solar panels for jungle bunnies.

It is not going to go away in a hurry. There is too much money in the scare. But, with this sort of idiocy rampant, there is no way back for the warmists. We need "Dexter" on an industrial scale (a meaningless reference unless you've seen the series).