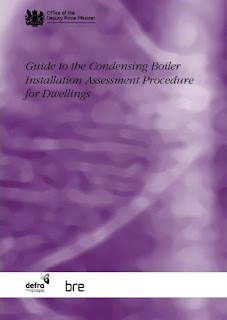 Coming back to the condensing boiler "scandal" - for that it is - we are aware that this equipment was foisted on the unsuspecting public in 2005 by John Prescott, then deputy prime minister. It was done through the expedient of amending the thermal efficiency requirements for domestic heating appliances in the Building Regulations.

As part of the process, though, the Office of the Deputy Prime Minister then in April 2005 issued formal installation guidance for these boilers, five pages of which were devoted to the condensate drain. On first view, there did not appear to be any mention of the danger of the pipes freezing, but a more thorough search shows several references to the problem.

For instance, pg. 13 tells the installers: "Any external condensate pipe work must be insulated to minimise the risk of freezing". Pg. 17 states: "Where possible connections should always be made to internal drain points (stack pipe or waste pipe). External termination points are more likely to become blocked by, for example, freezing ...". Pg. 18 states: "If an appliance does not include a siphon then external pipework is best avoided to reduce the risk of freezing. If this is not possible then external pipework should have a minimum nominal diameter of 32mm".

Typical manufacturer's instructions also include warnings about condensate drain freezing but, despite this, and the fact that installers must hold government-approved ("gas safe") qualifications, and are overseen by the HSE, hundreds of thousands of boilers seem to have been improperly installed. Thus, through the freezing winter of 2009-10, very large numbers of households began to experience problems.

So extensive had the problems become by early 2010 that the issue was raised by Jeff Howell in The Daily Telegraph on 19 January 2010. He noted that this (condensate pipes freezing) had been "a common reader's problem during the cold snap last winter", and it had "become even worse this year".

Then, on 25 February, in the context of enquiring about the then boiler scrappage scheme, Tory MP Philip Dunne told the House of Commons that condensate pipes were freezing up and: "the boilers break, with the result that households have no heat or hot water". "What are the Government doing to stop that happening?" he asked. 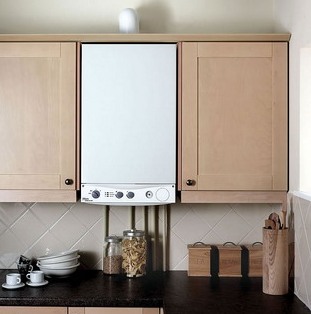 Joan Ruddock, answering on behalf of the government agreed that Dunne "may be correct about this being something that we need to look into." However, she said, "I hope that he will not want to detract in any way from the great success of the boiler scrappage scheme and the huge savings in CO2 emissions - and therefore the good effects on climate change - that it is achieving".

Needless to say, nothing was done by the then Labour government, or subsequently by the Cleggerons.  They seemed to have been concerned only with saving CO2 emissions.

Thus, despite the problem having been raised in Parliament, the official guidelines continue to be ignored in a large number of cases. No attempt seems to have been made to ensure that installers follow the guidance. There have been no further official warnings given to installers or existing users to take precautions to prevent freezing.

As a result of government neglect, therefore, over the holiday period, at the depths of the freeze, tens of millions of pounds have had to be spent by householders on emergency call-outs. The problem was predictable, had been reported, and then had been ignored by a government which had allowed it to develop to epidemic proportions.

To my mind, everyone who has had a boiler failure for this reason over the last cold period, has a valid claim against government, for the costs of the call-out and remedial action, and for consequential losses. That is the stuff of politics. If the government sets up these systems, it has the responsibility to make sure they work, and should be accountable when it does not.