It's the politics stoopid 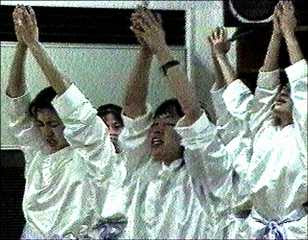 I meant to put this link up from Dellers. He is taking exactly the right line, mocking the warmists unmercifully (seen above, at prayer). You cannot deal seriously with people who believe that all and any natural phenomena they observe are "climate impacts" and will attempt to argue that the current freezing weather is caused by global warming.

Even the old pornographer can see the writing on the wall. From Can'tcun, the Pachauri is saying: "... it's just a matter of time before the public realises what we're in for ... ". He's dead right. Perhaps he had been told what was going on in Malta, where they are not too keen on rival religions and have told Greenie demonstrators to get stuffed.

Soon enough, the whole shambolic belief system will collapse. Such systems always do. We are confronted with the scare dynamic, here. And scares, as a social phenomenon, have structures and obey rules. This one, the global warming scare, is running true to form.

The next problem we have – which has never been addressed properly in any scare – is how to deal with the regulatory overkill. That is always the final phase of a a scare, where the regulators move in to create a vast matrix of laws and controls to address the supposed problems identified.

It is invariably this phase which does the most damage – the regulatory costs, the restraints and distortions to economic activity, and the constraints on personal liberty. They linger on well past the initial phase of the scare and, so far, society has not found an easy means of dealing with them.

Here, the really interesting issue is how scares so easily become exploited by regulators to pursue their specific interests – in what we came to call the doctrine of the "beneficial crisis" - and how slow people are to recognise the dynamic. This, with huge amusement we see in a WUWT post, where there is this observation:


What really strikes us is the fact that all this Copenhagen/Cancun stuff has nothing to do with the Climate, or saving the World. It's about political positioning, money, and plain old fascism cult promotion.

Well, you don't say! And if this is not a recognition of "Ursine subarboreal toilet activity" of the type identified by Dellers, I don't know what is.

The odd thing though is that so many of the clever little politics wonks you meet don't understand the scare dynamic either. They either ignore the scares or take the so-called scientific agenda at face value. They rarely appreciate that the "scare" or "beneficial crisis" is a means of institutional queue-jumping, a means of by-passing institutional inertia and democratic processes.

As always, look at a scare and you will find that science is only the dressing. At the heart, you will find it's the politics stoopid. It always is.