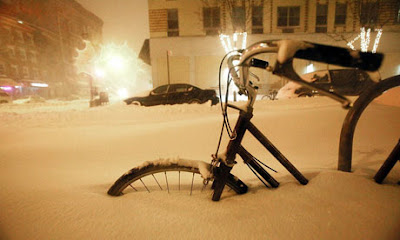 The blizzard in New York has been quick to attract a warmist disclaimer, delivered by Judah Cohen, director of seasonal forecasting at an atmospheric and environmental research firm. Says Cohen, "The reality is, we're freezing not in spite of climate change but because of it".

However, a guest post in WUWT quickly debunks this desperate warmist canard , pointing out that this is just another east coast blizzard, the current weather not being in any way different from the past.

To illustrate the point, the author, John Goetz, calls in aid the 1888 storm in New York which, according to contemporary records and subsequent comparisons (this one with the storm in 1920), was the greatest of them all.

This was the storm of 11-14 March, which would simply be known as the Blizzard of '88. Its heavy, drifting snows isolated four major American cities — Washington, Philadelphia, New York and Boston — for several days, dealing the latter two particularly devastating blows.

The storm's impact closed commerce in these cities for days, downed thousands of telegraph and telephone poles, and grounded two hundred ships. The death toll was estimated at more than 400, with around 100 of those being sailors, and 200 of the dead succumbed in New York City. Property losses reached $25 million ($562 million in 2007 dollars). Snow measured from 40-50 inches and drifted to over 50 feet in some places, burying houses and railroad trains.

The point made by Goetz is, quite simply, if this was clearly unrelated to global warming, how can we possibly assume that this current storm has anything to do with it.

But perhaps as good a point is the fact that, towards the end of the 19th Century, severe blizzards seem to have been relatively rare. The nearest comparison with the blizzard of '88 was the 1872 storm, 16 years earlier. Thus, when there was another serious blizzard in 1894, the New York Times noted on 27 February:


Pessimistic old gentlemen who have been entertaining grave fears for the "old- fashioned Winters we used to have" should have been very much cheered up yesterday. There was Winter enough to suit everybody.

And so it was again yesterday, when there was "winter enough to suit everybody". The "pessimistic old gentlemen", however, have transmuted into warmist zealots, and they are not suited. Way back to last century, though, it was only three years later, in January 1897 that a monster storm delivered snow to a depth of 34 inches.

If that was not global warming either, then why should we now be freezing because of it? And there is some more commentary on the subject here.