A dark and cold Britain 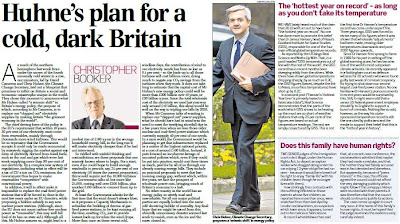 Booker, as you would expect, is doing the Huhne energy "plan" in this week's column. Ironically, therefore, we are getting the deadly duo of Chris Paul-Huhne and David "Euroslime" Cameron seeking to protect us from global warming on one of the coldest weeks in recent memory, something which Booker is quick to note.

But the 131-page blueprint they have on offer promises only to inflict on Britain a social and economic catastrophe unique in the world, Booker writes. They chose this moment to announce what Huhne called "a seismic shift" in Britain's energy policy, the purpose of which, according to Mr Cameron, is to replace our "clapped out" electricity supplies by making Britain "the greenest economy in the world".

As always, the chief driving force of the policy is the EU's requirements, and Booker is one of the few that is prepared to say so. Within ten years, 30 percent of our electricity must come from renewables – provided mainly through thousands more wind turbines.

This, as we know, is one of the most expensive (although not the most expensive) ways of generating electricity. This means the government has concluded that the only way it can be made competitive is by massively rigging the market against any form of electricity derived from fossil fuels such as the coal and gas, which were last week supplying more than 80 percent of our electricity.

That, then, is to be the nub of Huhne's "seismic shift". By a complex new system of regulations, including what in effect will be a tax of £27 a ton on CO2 emissions, the government aims to increase the cost of conventionally-produced electricity. By this means, renewables will become "competitive" with conventional power.

Even though this is barking mad, it is by no means the full extent of the horror. In addition, it will in effect make it impossible to renew the coal-fired capacity which is to be knocked out in the next few years by the EU's Large Combustion Plant Directive. There is, however, to be a hidden nuclear subsidy, which the government describes as "a credible alternative that could enable the electricity sector to meet the government’s decarbonisation and security of supply objectives."

Since the EU does not count carbon-free nuclear power as "renewable", we are still uncertain whether this will fall foul of its ban on state aid, although the government is also talking about a "low carbon obligation" as a means of giving nuclear generators a premium price. Again, there are no indications as to whether this would be allowable under EU law.

With all that, Huhne is assuring us that there will be only a modest rise of £160 a year in the average household energy bill, the effect of his plan in the long run being to make electricity cheaper than if he had not intervened. This is supported by a series of incomprehensible figures which, Booker remarks, are so riddled with wishful thinking and contradictions are these proposals that one scarcely knows where to begin.

For a start, even if we could hope to build enough windmills to provide, say, 25 percent of our electricity (10 times the current proportion and still less than the EU renewables requirement), this would require not the 10,000 turbines the Government talks of, but more like 25,000, costing well over £200 billion. Then there could be another £100 billion to connect them up to the grid.

At least the Government admits for the first time that the wind doesn't always blow; so it proposes a Capacity Mechanism to subsidise the building of dozens of gas fired power stations, to be kept running all the time, emitting CO2, just to provide instant back-up for when the wind drops.

More than once on these recent cold, windless days, the contribution of wind to our electricity needs has been as low as 0.1 per cent – so the back-up to all those turbines will cost billions more, doing much to negate any CO2 savings from the turbines when they work. It does not take long to estimate that the capital cost of Huhne's new energy policy could well be more than £300 billion over 10 years, or £30 billion a year. Since the total wholesale cost of the electricity we used last year was only around £19 billion, this alone would be well on the way to tripling our bills by 2020.

Thus, when Cameron talks of wanting to replace our "clapped out" power supplies, what he should have had in mind was the need to meet the terrifying shortfall due in a few years time when we lose those older nuclear and coal-fired power stations. The latter currently supply 40 percent of our needs and sometimes slightly more.

In a sane world, the government would be planning to get that infrastructure replaced as a matter of the highest national priority, at a cost of around £100 billion. Instead, it puts forward an incoherent farrago of policies which, even if they could be put into practice, would cost three times as much.  Then, sneakily, they have to be paid for by all of us through our already soaring energy bills which are and will increasingly be padded by undeclared taxes and levies.

Crucially, Huhne's plans include no practical proposals to meet that fast-looming energy gap, without which, within five years, we face the prospect of wholesale power cuts, bringing much of Britain's economy to a halt. This really is the greatest indictment of this excuse for a secretary of state. Many time, and especially in a series of posts in 2008, such as here on 10 September and here on 3 August, we argued that the Conservatives must treat energy policy with the utmost of urgency. Seven months into their new administration, all we get is this.

No other country in the world has an energy policy so utterly mad and unworkable, not least because "decarbonisation" rather than energy security or cost seems to be the primary concern. Yet all our major political parties are equally locked into the same self-deceiving bubble of unreality. With that, Booker concludes, any final hope that we might be saved from this absurdly unnecessary disaster seemed last week to vanish, even as the ice and the snow closed in.