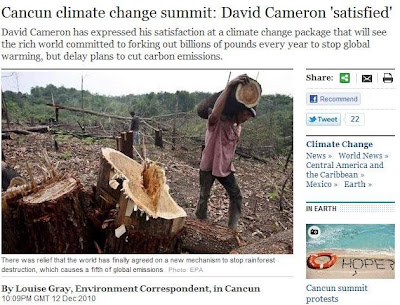 David Cameron, we are told by the fair Louise, has expressed his "satisfaction" at the climate change package agreed at the Cancun climate change summit. And the proximate cause of this satisfaction is that it "will see the rich world committed to forking out billions of pounds every year to stop global warming, but delay plans to cut carbon emissions".

Although the sums are not specified, we already know that this will amount to £2.9 billion in the short-term, on top of the £18.3 billion annually that the Climate Change Act is set to cost us.

Had we not already plenty of reasons to loathe him, the fact that this creepy, smug little man is "satisfied" at developments would be sufficient unto itself. But the strange thing is how he can possibly sustain any support at all for his political programme when he is throwing away such large sums on such a contentious and increasingly unpopular cause.

"We are all in this together," the man would have us believe. But we are not, and with this crass statement, the divide just got bigger.