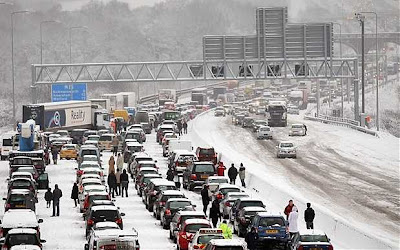 As news pours in of the misery experienced by the travelling public as a result of the bad weather, alongside increasing evidence of the lack of preparedness of the authorities, we can only observe that the situation is very much of chickens coming home to roost.

There can be absolutely no dispute that the billions spent on global warming dwarfs the pitiful amount of money spent on preparing for adverse winter conditions. As importantly, with the Met Office and the government looking in the wrong direction, there has been insufficient planning for the eventuality of a bad winter.

One can, however, have little sympathy with those suffering the inadequacies of our rulers and administrators. Spending on winter preparedness is essentially a political decision – which makes this a serious political issue. This is the stuff of real politics.

But in this trivial, fundamentally unserious nation of ours, people have grown up with the idea that they can opt out of politics and leave them to the professionals. Well, it has been said that you either take an interest in politics, or it will take an interest in you. I have been known to say that democracy is not a spectator sport.

Many people over the past few days and the days to come are now going to suffer not only from the politicians' neglect, but their own. Chickens are indeed coming home to roost, but from some unexpected directions as well.