The hijack of the Met 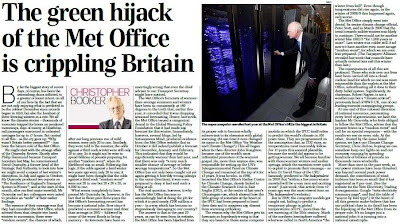 By far the biggest story of recent days, writes Christopher Booker, has been the astonishing chaos inflicted, to a greater or lesser extent, on all of our lives by the fact that we are not only enjoying what is predicted to be the coldest December since records began in 1659, but also the harshest of three freezing winters in a row. We all know the disaster stories – thousands of motorists trapped for hours on paralysed motorways, days of misery at Heathrow, rail passengers marooned in unheated carriages for up to 17 hours.

But central to all this – as the cry goes up: "Why wasn't Britain better prepared?" – has been the bizarre role of the Met Office. We might start with the strange affair of the Quarmby Review. Shortly after Philip Hammond became Transport Secretary last May, he commissioned David Quarmby, a former head of the Strategic Rail Authority, to look into how we might avoid a repeat of last winter's disruption.

In July and again in October, Mr Quarmby produced two reports on "The Resilience of England's Transport System in Winter"; and at the start of this month, after our first major snowfall, Mr Quarmby and two colleagues were asked to produce an "audit" of their earlier findings. The essence of their message was that they had consulted the Met Office, which advised them that, despite two harsh winters in succession, these were "random events", the chances of which, after our long previous run of mild winters, were only 20 to one.

What seems completely to have passed Mr Quarmby by, however, is the fact that in these past three years the Met Office's forecasting record has become a national joke. Ever since it predicted a summer warmer and drier than average in 2007 – followed by some of the worst floods in living memory – its forecasts have been so unerringly wrong that even the chief adviser to our Transport Secretary might have noticed.

The Met Office's forecasts of warmer than average summers and winters have been so consistently at 180 degrees to the truth that, earlier this year, it conceded that it was dropping seasonal forecasting. Hence, last week, the Met Office issued a categorical denial to the Global Warming Policy Foundation that it had made any forecast for this winter.

Immediately, however, several blogs, led by Autonomous Mind, produced evidence from the Met Office website that in October it did indeed publish a forecast for December, January and February. This indicated that they would be significantly warmer than last year, and that there was only "a very much smaller chance of average or below average temperatures". So the Met Office has not only been caught out yet again getting it horribly wrong (always in the same direction), it was even prepared to deny it had said such a thing at all.

The real question, however, is why has the Met Office become so astonishingly bad at doing the job for which it is paid nearly £200 million a year – in a way which has become so stupendously damaging to our country?

The answer is that in the past 20 years, as can be seen from its website, the Met Office has been hijacked from its proper role to become wholly subservient to its obsession with global warming. (At one time it even changed its name to the Met Office "for Weather and Climate Change".)

This all began when its then-director John Houghton became one of the world's most influential promoters of the warmist gospel. He, more than anyone else, was responsible for setting up the UN's Intergovernmental Panel on Climate Change and remained at the top of it for 13 years. It was he who, in 1990, launched the Met Office's Hadley Centre for Climate Change, closely linked to the Climatic Research Unit in East Anglia (CRU), at the centre of last year's Climategate row, which showed how the little group of scientists at the heart of the IPCC had been prepared to bend their data and to suppress any dissent from warming orthodoxy.

The reason why the Met Office gets its forecasts so hopelessly wrong is that they are based on those same computer models on which the IPCC itself relies to predict the world's climate in 100 years time. They are programmed on the assumption that, as CO2 rises, so temperatures must inexorably follow.

For 17 years this seemed plausible, because the world did appear to be getting warmer. We all became familiar with those warmer winters and earlier springs, which the warmists were quick to exploit to promote their message – as when Dr David Viner of the CRU famously predicted to The Independent in 2000 that "within a few years winter snowfall will be a very rare and exciting event". (Last week, that article from ten years ago was the most viewed item on The Independent's website.)

But in 2007, the computer models got caught out, failing to predict a temporary plunge in global temperatures of 0.7°C, more than the net warming of the 20th century. Much of the northern hemisphere suffered what was called in North America "the winter from hell". Even though temperatures did rise again, in the winter of 2008/9 this happened again, only worse.

The Met Office simply went into denial. Its senior climate change official, Peter Stott, said in March 2009 that the trend towards milder winters was likely to continue. There would not be another winter like 1962/3 "for 1,000 years or more". Last winter was colder still. And now we have another even more savage "random event", for which we are even less prepared. (The Taxpayers' Alliance revealed last week that councils have actually ordered less salt this winter than last.)

The consequences of all this are profound. Those who rule over our lives have been carried off into a cloud cuckoo land for which no one was more responsible than the zealots at the Met Office, subordinating all it does to their dotty belief system. Significantly, its chairman, Robert Napier, is not a weatherman but a "climate activist", previously head of WWF-UK, one of our leading warmist campaigning groups.

At one end of this colossal diversion of national resources, permeating every level of government, we have the hapless Mr Quarmby, who feels obliged to follow the Met Office, advise that the present freeze is a "random event" and call for no special responses – with the results we see on every side. At the other, fixated by the same belief system, we have our climate change secretary, Chris Huhne, hoping we can somehow keep our lights on and our economy running by spending hundreds of billions of pounds on thousands more windmills.

More than once in the past week, as our power stations have been thrashed way beyond normal peak power demand, the contribution of wind turbines has been so small that it has registered as zero percent. (See "neta electricity summary page") At the heart of all this greenie make-believe that has our political class in its thrall has been the hijacking of the Met Office from its proper role. It's no longer just a national joke: it is turning into a national catastrophe.