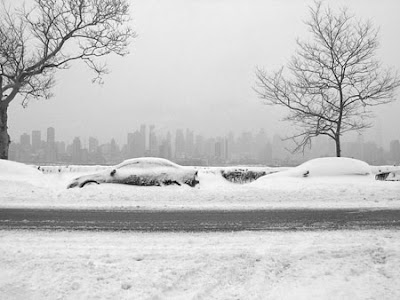 I said it was going to be a game changer and there is no reason to change my mind. Dellers takes on the Met Office, backed up by Autonomous Mind, their efforts setting the seal on the demise of its credibility as an institution.

With the Tories set on building their high-speed train set, it is fascinating to see transport secretary Hammond dragged back from his grandiose dreams to the squalor of the current situation. Heathrow looks more like a third world refugee camp than a modern, first world airport and, for the first time, there is serious talk about heads rolling.

Tired and edgy, Hammond is having to defend the indefensible and so is the BBC. Its News 24 programme did a lengthy special on the crisis, and managed to do so without once mentioning global warming. But that is the issue on everyone's mind. Tectonic plates are grinding together and the upheaval is only just beginning.

On the other front, Huhne's wet dream about wind power is looking more and more absurd. At the time of writing, electricity generation reports had coal-fired power stations taking a thrashing, delivering 43 percent of available power, with wind contributing a farcical 0.1 percent, a trivial 44MW out of an installed, metered capacity of 2,430MW. The man's ideas about wind taking up the slack are totally unrealistic. Actually, they are barking mad.

Like watching a train wreck in slow motion, though, it is evident that the political classes and the Tories in particular have no real idea or understanding of what is about to hit them. They are still locked into the old paradigm where they think the political parties set the agenda and the rest of us take our lead from it.

That, if anything, has been the biggest change in British politics since the Cleggerons assumed office but not power. Fewer people than ever before – including this blogger and others - give the proverbial tinker's cuss about the preoccupations of the political classes. When Moore wrote of the growing divide between "Us" and "Them", he could not have been more correct.

In part, what is going to do for them is the very issue that the political classes are currently trying to ignore – the utter shambles in the transport system which is very seriously inconveniencing people and causing very great hardship. Patience is stretching to breaking point as people realise that this is a man-made – or politician-made - crisis, not a natural disaster. People frustrated in their travel plans, and condemned to a miserable Christmas, are not going to forget quickly, or forgive easily.

Interestingly, the Canadian Globe and Mail can see that this is a political issue, even if it hasn't put the whole story together. But the political establishment here seems blind to the implications. It is so locked into its own self-referential bubble that it has lost the ability to discern what is important to ordinary people.

However much the denizens of the bubble try to ignore it, though, it isn't going to go away. You can hear the grinding as the plates move up against each other. Those who are deaf to the signals - who do not understand that we are witnessing a major political event - will be so surprised when their little worlds start to shatter. But there will be many of us who, like this winter cold, saw it coming. And the winter has hardly begun.