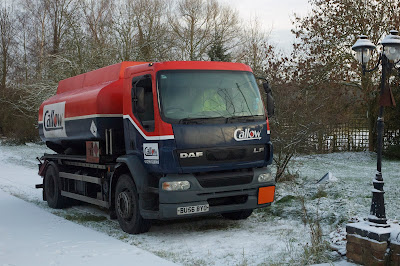 Tucked away safely in their comfortable offices in London, our political slime might be able to convince themselves that they are running an advanced, progressive country. But the test – or one of them – is not soaring ambitions or the rhetoric, but the capacity to secure the basics, ensuring that the nuts and bolts of society are provided and kept on track. And here, as we learn, they can't even do that.

Huhne, as climate change and energy secretary, is soooo full of himself and his energy revolution but he and his department can't even ensure that the estimated two million homes, schools and hospitals which rely on oil for their heating are going to get supplies over Christmas.

Most of these, of course, are in remote areas, where there is little choice of fuel, and as many as 60 percent of families in Northern Ireland – some 505,000 homes – are reliant on heating oil and now face rationing.

Yet this fatuous excuse for an energy secretary is so obsessed with his plans to increase the costs of energy and deliver "low carbon" electricity that he has let a supply crisis build up under his very nose, and is completely unprepared to deal with it. This – as with so many things in modern government – is where the fault lines lie. These "clever" people are so buoyed up with their own importance and ambitions that they completely fail to address the basics.

Much of this is about ensuring that roads are cleared and properly gritted, so that delivery tankers can get through – something local authorities are manifestly failing to do. But it is also about being prepared for the unexpected and ensuring that the utilities, suppliers and users are given warnings in good time.

Possibly, though, the bigger problem is that our politicians are so self-obsessed that they do not even realise – or care – where they are going wrong. But, as their ambitions soar, through their actual endeavours they are increasingly presiding over a third world country.