They were all at it 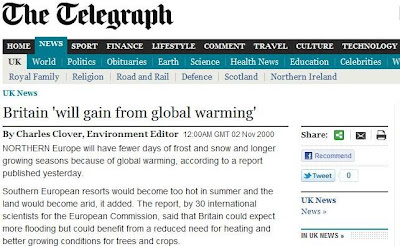 It wasn't just David Viner who was predicting back in 2000 that snow would disappear. We also had the great Charles Clover then of The Daily Telegraph, who on 2 November 2000 was telling us: Britain "will gain from global warming". Northern Europe, he wrote, "will have fewer days of frost and snow and longer growing seasons because of global warming".

Winters in Northern Europe would be wetter and there would be a reduction in number of days with frost and lying snow. There would be no cold winters by the 2080s. Cold winters, which currently occurred once in ten years, would be half as frequent by the 2020s.

Interestingly, these gems came from a report commissioned by the EU Commission, as part of what was known as the "Acacia Project", the EU contribution to a major re-assessment by the IPCC. And the project co-ordinator and report editor was Prof Martin Parry, of the University of East Anglia – colleague of Dr Viner.

Of course, of the people working in the year 2000, all would be long retired by 2080, although the Parry team did create their own hostages to fortune by suggesting that there would be significant observable changes by 2020. By so doing, they set the level of expectations which, for a few years, the warmists were happy to reinforce.