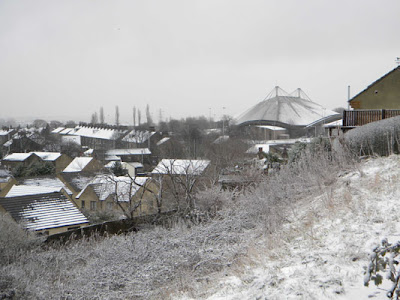 It started this morning at 09:26 precisely. We can be so definite because the noise of the snow lashing at the window alerted us to the moment when the global warming hit us again. Within minutes, the ground and the roofs were white. Now the snow has settled down to a light, persistent downfall, from leaden skies, leaving a wet, slushy reside, intensifying as I write (12:10), with the snow on the ground deepening by the minute.

How ironic it is that this is the day that that idiot Huhne (pictured below) launches his new energy plan – the one designed to save us from global warming. But then, morons such as Huhne don't do irony. It is beyond their capabilities.

As to how much it is going to cost us all, no one really knows. One newspaper says about £500 a year, the BBC says otherwise and the Financial Times says something different. Biased BBC has sussed it. The details are so vague that you can shape them to convey whatever message is required. Obfuscation is the name of the game.

Generally speaking, it seems that the agreed figure needed by way of investment is £200 billion - about twice what would actually be needed sensibly to renew the estate with conventional capacity.

And from what we know of Huhne's mad ideas, it would appear that the Renewables Obligation is to go, replaced by graded feed-in tariffs, which will include nuclear. How that gets past the EU's prohibition on state aid is unclear and, given the lacklustre performance of the modern civil service, you cannot guarantee they've got it right. 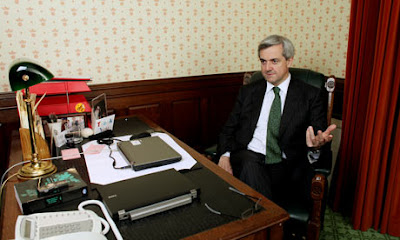 Secondly, there is going to be a "capacity payment" to bribe suppliers to build back-up plant – mainly gas-fuelled power stations – to deal with the majority of occasions when wind does not deliver. This is where we pay twice for the same thing, duplicating capacity that would not otherwise be needed.

Then we are to have madness itself, a minimum price for "carbon" – i.e., carbon dioxide – a tax by any other name, which will penalise CO2 emitters and further jack up our energy bills. This will be skewed to make sure that back-up plant is only used for back-up, which means our electricity is going to be very expensive indeed.

The fourth Huhne madness is an "Emissions Performance Standard". This is supposed to impose tough emissions regulations on new power plants, effectively banning the construction of new coal plant without CCS. Again, how that impinges on EU law is not made clear.

The thing that is very clear though is that, outside, it is very cold and very white. Needless to say, that will not have the least effect on the warmists. They will go to their graves insisting that this is the warmest year since dinosaurs first inhabited that planet. WUWT explains why they are mistaken, but again that will have no effect on dyed-in-the-wool warmists.

People are not stupid though, and energy prices are the stuff of politics – an issue that the so-called "political" sites are largely ignoring this morning. The MPs ignore it at their peril though - as the hammering Huhne is getting on the Daily Telegraph comments will attest. When people are cold and are having to pay even more for their basic needs, taking home reduced pay and pensions, while paying more taxes, you have a recipe for some very unhappy bunnies.